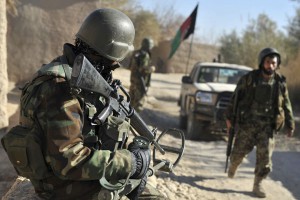 Meanwhile, Taliban gunmen fanned out in full force Tuesday across a key Afghan city they captured the day before, as the U.S. military carried out an airstrike on Kunduz and President Ashraf Ghani vowed to take the northern city back from the insurgents, urging his nation to trust Afghan troops to do the job.

The Afghan military launched a counter-offensive on the city, Ghani said in a televised address to the nation, adding that his security forces are “retaking government buildings … and reinforcements, including special forces and commandos are either there or on their way there.”

“The enemy has sustained heavy casualties,” said Ghani, who marked his first anniversary in office on Tuesday. He urged his nation to trust Afghan troops and not give in to “fear and terror.”

But Monday’s multi-pronged assault on Kunduz took the Afghan authorities and military officials by surprise. Hundreds of Taliban launched a coordinated attack and after a day of fierce fighting, they managed to overrun government buildings and hoisted their flag in the city square.

The fall of the city of 300,000 inhabitants – the first urban area taken by the Taliban since the 2001 U.S. invasion ousted their regime – was also a major setback to Ghani, who has staked his presidency on bringing peace to Afghanistan and seeking to draw the Taliban to peace talks.

Taliban gunmen were patrolling the streets of Kunduz on Tuesday, setting up checkpoints, searching for government loyalists and sealing off exit routes for anyone who wished to escape.

In Kabul, the National Security Council was meeting to discuss the development. The number of dead and wounded in the fighting was unclear.

Wahidullah Mayar, the spokesman for the Public Health Ministry said on his Twitter account that Kunduz hospitals received “172 wounded patients and 16 dead bodies so far.”

Doctors Without Borders, the international charity, said its trauma center in Kunduz received 129 wounded since early Monday morning, including 20 women and 39 children. Of the total, nine had died, said Kate Stegeman, an MSF field communications manager.

The Taliban issued a statement, attempting to reassure residents of Kunduz that they were safe. Hours after the fall, people had streamed out of the city late Monday.

But by Tuesday morning, roads were blocked and some government buildings set on fire, several residents told The Associated Press over the phone. They spoke on condition of anonymity, fearing for their safety.

“From this morning, the Taliban have been setting up checkpoints in and around the city, looking for the government employees,” one resident said. “Yesterday it was possible for people to get out of the city, but today it is too late because all roads are under the Taliban control.”

The Taliban controlled Afghanistan from 1996 until they were dislodged by the 2001 U.S.-led invasion. Their rule was marked by brutality, with so-called apostates subject to arbitrary justice.

The insurgents have had a heavy presence in Kunduz since launching their annual summer offensive with an assault on the city in April. That marked the start of a campaign across the north, with attacks reported in recent days in neighboring Takhar province, and intermittent attacks on districts around Kunduz city. Official say the Taliban have allied with other insurgent groups to boost numbers and fire power.

The U.S. military carried out at least one airstrike on Tuesday on the city “in order to eliminate a threat to the force,” spokesman U.S. Col. Brian Tribus said. Neither the U.S. nor NATO troops are believed to have an operational presence in the region, though the German military control a major base in the nearby city of Mazar-i-Sharif.

Security analyst Ali Mohammad Ali described the Taliban takeover as “a shock but not a surprise because every province in Afghanistan is as fragile as Kunduz.”

Afghan security forces have been sorely tested this year, following the withdrawal at the end of 2014 of international combat troops. Army and police have suffered huge casualties and their resources have been spread thinly across the country as the Taliban have taken their fight to topple the Kabul government to every corner of the country.

With the capture of Kunduz, the Taliban have achieved a “huge political and propaganda victory,” said Ali.

The Defense Ministry said government forces had already retaken some parts of the city early Tuesday, including a newly-built police headquarters and the prison in Kunduz. Reinforcements, including special forces, were sent to the region from across the country.

MSF and the International Red Cross said they had evacuated some of their international staff from Kunduz. All U.N. staff were evacuated on Monday.

“The enemy’s main objective was to create fear and terror,” Ghani told the nation.

Kunduz is one of the largest and wealthiest cities in Afghanistan, and the surrounding province, also called Kunduz, is one of the country’s chief breadbaskets and has rich mining assets. It lies on a strategic crossroads connecting Afghanistan to Pakistan, China and Central Asia.