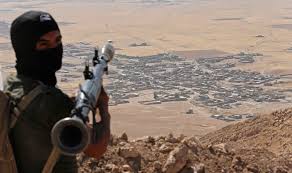 Afghanistan has seen a spate of terror attacks over the past two weeks, with some 130 people killed. Both major militant groups, the Taliban and ISIS, have been blamed for the carnage, like reported by atimes.com.

The Taliban has a long history in Afghanistan, while ISIS militants, who are equally assertive, are newcomers. While the Taliban operates exclusively within the country’s borders, ISIS also focuses on neighboring states, which is why Tajikistan, Uzbekistan, and Turkmenistan are bracing for attacks.

Central Asian governments feel like they are caught between a rock and a hard place as experienced jihadists return to their home countries. Armed both with combat and propaganda skills, they can successfully take advantage of corrupt bureaucracies failing to tackle social and ethnic problems. On the other hand, according to a Soufan Group report, some ISIS returnees are seeking new theatres of jihad, such as Afghanistan.

Experience has shown that strengthening borders by tightening customs controls is not a sufficient response. It is the core of the problem that must be addressed. First of all, when it comes to ISIS fighters returning to their home countries, we should take a constructive rather than an emotional approach. The crucial point is that jihadists leaving conflict zones in the Middle East are not a monolithic entity.

“ISIS returnees should be looked at as individual cases, because they are returning to their homes with a variety of different reactions to their experience. Some — the most devoted members — are unreconstructed jihadists and will re-enter militant life as soon as they are given a chance. Others, however, are disillusioned by the overall experience abroad, as well as by the fate of the organization they once supported. They were told that the creation of the Islamic State was God’s will, so the bloody demise of the ISIS effort is making them reconsider their beliefs and future allegiance to jihadist doctrines. Many more are traumatized by what they have seen and want to put it behind them, and live a normal life. In the very least, these returnees are extremely valuables sources of intelligence for us and require individual attention. It is not easy to do that because it takes a lot of resources, time and money, but it is an essential step that must happen,” Fitsanakis said.

Indeed, instead of isolating ISIS returnees, it is more productive to exploit their experience and knowledge, using them as a weapon against ISIS itself. A constant flow of radical Islamic propaganda generates new recruits; therefore, the experienced fighters, though valuable, are not actually irreplaceable. Whereas for Central Asia’s security services, foreign fighters are priceless, providing a deeper insight into the enemy’s thinking. Such an approach offers plenty of opportunities. For example,  in his book “Understanding Terror Networks,” Marc Sageman, an American counter-terrorism expert, suggests repentant jihadists seeking public forgiveness can play an important role in countering Islamist propaganda.

ISIS established its branch in Afghanistan in 2015, and since then has been attracting foreign fighters, including those of Central Asian origin, as an alternative to war zones in the Middle East. ISIS Khorasan Province has drawn defectors from the Taliban and was joined by part of the Islamic Movement of Uzbekistan, a radical Islamist group set up in the late 90s with the aim of overthrowing the then president of Uzbekistan, Islam Karimov, and establishing Sharia law there.

What allows ISIS to hold sway in Afghanistan?

Two key factors should be highlighted. The first one is linked to the country’s tribal system. In a stable environment, there is a relatively sustainable balance between the three main ethnic groups — Pashtuns, Tajiks, and Uzbeks. Meanwhile, each group in turn is divided into “strong” and “weak” elements, with the former offering patronage to the latter. This works under normal conditions, which is not the case for present-day Afghanistan.

ISIS as a new “strong group” has taken on those who have been humiliated and disgraced, promising them a fair and just society. In return, the group demands allegiance — quite a tempting deal for many. Its target social groups include Tajiks and Uzbeks, as well as those Afghans who have found themselves excluded from the existing social system.

The second factor is Afghanistan’s resources. Apart from the profitable drug traffic, thesre are minerals, primarily emeralds and lithium. Raising funds has always been a crucial part of the ISIS strategy, and it has been remarkably successful. As Joseph Fitsanakis put it, “During its peak in 2015, ISIS was probably the wealthiest terrorist group in modern history.”

He added: “It has since lost most of its sources of power. But its financial strength is not negligible. The group is currently estimated to have access to $200 million, which is significant and must not be discounted. Additionally, ISIS is still strong in parts of Africa, including Egypt, Afghanistan, and Southeast Asia, with funds that are independently administered in those locations. Last but not least, ISIS employs international banking experts who know how to wire funds covertly to all kinds of operatives around the world. So even though the organization has been militarily neutralized on several fronts, its online and financial components continue to exist and are in fact formidable.”

So, what should be expected with regard to Central Asia? An increasing threat to the countries’ national security from radical Islamists is apparent. However, timely and adequate measures should be implemented by the security services to prevent the problem from evolving into a nightmare. Proper intelligence work, disrupting the financing of extremist activity, as well as cooperation between security services at the supra-national level would likely be effective.