You are here: Home / Senza categoria / As ISIS continues to lose ground, Al-Qaida stands to win 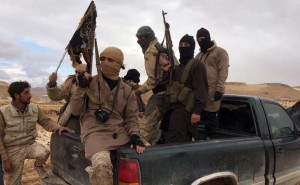 The Islamic State’s split from al-Qaida and its resulting dominance in the terrorist sphere is a major blow to an already beleaguered al-Qaida network, but while the U.S. continues to focus on ISIS, al-Qaida is quietly moving forward.

Despite losing its status as the predominant brand of Islamic terrorism, al-Qaida has not been silent since splitting with ISIS in 2014. The group is maintaining, and in some cases growing, its presence in several areas across the Islamic world. Al-Qaida has strengthened its positions in Syria and Yemen, for example, and continues to engage in turf wars with various ISIS affiliates.

Africa continues to be one of the most contentious battlegrounds for terror recruitment. Boko Haram, currently an ISIS affiliate in Nigeria, was at one point split over whether to pledge itself to al-Qaida or ISIS. Today, its new leadership has reportedly mulled the idea of realigning with al-Qaida. The caliphate has established a foothold in war-torn Libya, which is currently fighting for its existence in the coastal city of Sirte. Concurrently, al-Qaida made progress with its affiliate in Algeria and Mali, known as al-Qaida in the Islamic Maghreb (AQIM).

Somalia is proving to be one of the greatest battlegrounds for the hearts and minds of Islamic terrorists. Al-Qaida maintains a presence in the broken country through its affiliate group al-Shabaab, but splintering within the ranks is leading some of its members to pledge allegiance to ISIS.

Many jihadis are drawn to ISIS over al-Qaida as a matter of preference. While both groups share a similar belief in radical Islamism, ISIS’s flashy propaganda and brutal violence is appealing to younger terrorists who desire to wage jihad on the battlefield, as opposed to the shadows. Al-Qaida usually prefers a more covert strategy that relies on uniting Muslims against the West. ISIS, on the other hand, does not have the same patience, preferring to engage in horrific violence to get their way, often against fellow Muslims. Al-Qaida leader Ayman al-Zawahiri rebuked ISIS’s indiscriminate violence on multiple occasions during its rise. In fact, the group’s tactics are part of the reason for its split from al-Qaida.

ISIS appeared to be winning the propaganda contest with al-Qaida a year ago, regardless of its questionable methods. The so-called caliphate, with affiliates across the Islamic world, started drawing in huge numbers of recruits. But ISIS’s large territory in Iraq and Syria is a weakness and a benefit. A terrorist group with an infrastructure and standing army is much easier to hit with air strikes compared to a guerrilla campaign waged in the mountains and desert. ISIS’s horrific violence, while useful in propaganda videos, unites dozens of countries and even other radical groups against it. The result has been profoundly negative; officials estimated in July that around half of ISIS territory is lost, including several key cities.

The caliphate’s ability to wage war in Syria consequently diminished, allowing Jabhat Fateh al-Sham (JFS), formerly known as the Nusra front, to become the featured terrorist group in the country. While al-Qaida may have a small foothold in Afghanistan, al-Qaida still continues to have a remarkable presence. And while al-Shabaab may have lost some fighters to ISIS, it has been able to carry out some of its most deadly attacks ever during the caliphate’s reign. And al-Qaida in the Arabian Peninsula (AQAP) continues to be a dominant force in Yemen.

While ISIS may have gained headlines in the last several years, al-Qaida is hardly silent, and ISIS’s recent losses could very well be al-Qaida’s gain.

“Osama bin Laden said everyone loves a strong horse,” Michael Rubin, a terrorism expert and resident scholar at the American Enterprise Institute, told The Daily Caller News Foundation. “Should ISIS be on top, most of the fighters will choose ISIS. If al-Qaeda appears stronger, the same fighters will migrate over.”

The competition between terrorists groups since bin Laden’s death has been a never-ending race to see who can come up with the “most spectacular attack in order to prove themselves the leaders of [the] the Islamist world,” according to Rubin. Unfortunately, the results of the competition are leading to the deaths of innocent people from Miami to Kabul.

ISIS’s territorial losses are not necessarily mitigating its ability to engage in terrorist attacks. Indeed, ISIS is growing more effective in targeting cities in both the West and Middle East since the start of Operation Inherent Resolve, the international mission against ISIS. Several experts and officials are predicting that after losing its caliphate, ISIS may simply revert back its traditional terrorist roots. The competition between the two groups will continue long after ISIS leader Abu Bakr al-Baghdadi is killed, according to Rubin. But if al-Qaida proves to be the strongest horse going forward, it could very well come out on top.