You are here: Home / MidEastGulf / As Hezbollah weakens, Iraqi Shiites step up 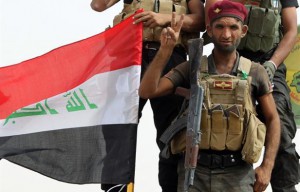 Abu Jaafar al-Asadi is a young and rising Shiite star. Leading the charge against the ISIS in Iraq, Asadi is the secretary general of Jund al-Imam and the spokesperson of Popular Mobilization, the coalition of Shiite militias sponsored by the Iraqi Interior Ministry.

A former student of the Iranian religious seminary in Qom, Asadi visited the US last week and delivered a speech at the Mobilization Is our Dignity Conference in Dearborn, Michigan.
Born in 1971, Ahmad Jassim Saber joined the 1991 Shiite uprising against Saddam Hussein in southern Iraq while still in college. He was arrested and later released. He joined the Islamic Movement founded by an Islamic Daawa Party defector by the name of Mahdi Abed Mahdi, aka Abu Zaynab Al-Khalisi.

By the mid-1990s, Asadi had relocated to Iran, where he received military and intelligence training. He was assigned to command Axis 70 on the Iraqi-Iranian border and participated in guerrilla operations against Saddam’s forces. After America toppled Saddam in 2003, the Islamic Movement moved back home.

In Iraq, the group vowed to never “deal with the American occupation,” and even though Asadi said that his group “only supported” operations against American troops but never executed them, the US arrested Khalisi in 2003 and released him in 2006. Weeks later, Khalisi died of cancer that Asadi and his group believe the Americans “implanted in him.”

After the “martyrdom” of the founder, the group’s top position was in flux until Asadi was elected secretary general in 2009. When Prime Minister Haidar al-Abadi replaced Nouri al-Maliki in August 2014, Asadi was the election’s first runner-up, and took Abadi’s parliamentary seat a as a representative of Baghdad.

Asadi said the Islamic Movement wanted to run in Iraqi parliamentary elections in 2005 and 2009, but could not because of American restrictions that banned groups with Islamist or violent names or charters from running.

He said that in January 2014, he met with Maliki and proposed the formation of “popular defense committees.” Iraqi expert Nebras Al-Kazimi published minutes of an April 2014 meeting of the Iraqi National Coalition, the all-Shiite parliamentary bloc, in which Maliki announced the creation of this “popular” Shiite militia, two months before the meltdown of the Iraqi Army’s units in Mosul facing an ISIS takeover.

When Grand Ayatollah Ali Sistani issued a fatwa urging Shiite men to rally to the defense of Baghdad and the Shiite south in the aftermath of the Mosul defeat, the name of these Shiite militias was changed to Popular Mobilization.

According to Asadi, the Iraqi Interior Ministry, with an annual budget of $3.8 billion, trains and arms Jund al-Imam and pays its fighters’ salaries. The ministry is under the command of Mohamed Al-Ghabban, a member of the pro-Iranian Badr militia.

Asadi and his group reportedly receives special attention from General Qassem Soleimani, commander of the IRGC Quds Force, and his second-in-charge in Iraq, lawmaker Jamal Jaafar (aka Abu-Mahdi Al-Mohandes), who is accused of organizing attacks targeting the US mission in Kuwait in the 1980s.

Until recently, Lebanon’s Hezbollah, with its formidable military, intelligence and social network power, was the jewel of Iran’s worldwide militias. But after the Syrian uprising in 2011 and Iran ordering Hezbollah to enter Syria to fight alongside Bashar Assad, Hezbollah’s shortcomings have become visible.

Only one in every four Lebanese is Shiite. In Syria, Assad’s Alawites make up around 13 percent of a population of 18 million. Despite military superiority, a shortage in manpower eventually caught up with both Assad and Hezbollah. Iran was left with Iraqi Shiites, counting over half of the country’s population of 25 million.

Unlike Hezbollah and Assad, who heavily rely on Iranian oil money, Iraqi Shiite militias have the funds of one of the world’s biggest oil-producing states at their disposal.

And unlike Hezbollah, the leaders of which have accumulated decades of bad blood with the West, especially America, Asadi is a fresh face who can visit Dearborn and rally Shiite support. He probably tweaked the name of his militia into the seemingly non-violent and non-Islamist Jund al-Imam to make it easier for his American contacts.

Asadi is Iran’s rising Shiite star in Iraq and the region. He is young, charismatic and enjoys a seemingly unlimited pool of Iraqi recruits and state funds. And he is not alone. Iran now runs a dozen Shiite militias in Iraq and has many budding leaders like Asadi.

With the waning power of Lebanon’s Hezbollah, Iran is preparing the second generation of its proxy Shiite groups. Assadi is just one example.