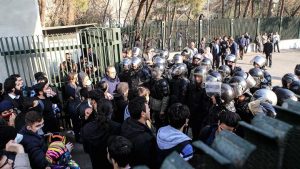 At least 8,000 people have been arrested as anti-government protests in Iran enter their third week.

Iranian authorities have rounded up young protesters from a number of provincial cities such as Hamadan, Isfahan and Lorestan, according to Saudi-owned Arab broadcaster Al Arabiya. The outlet cited unnamed sources inside Iran.

Tehran member of parliament Mahmoud Sadeghi said on Tuesday (9 January) that 3,700 people have been detained since protests broke out in late December. At least 21 people were killed in violence between protesters and authorities.

But the Iranian government puts the number of arrests at only 450.

The White House said earlier this week it was “deeply concerned” at the number of arrests the Iranian government had made against people “engaging in peaceful protests”.

However, US President Donald Trump is today (12 January) expected to extend a sanctions waiver for Iran, leaving its 2015 nuclear deal intact. The deal relaxes sanctions on Iran in return for the suspension of its nuclear development programme.

A spokesman for British Prime Minister Theresa May said earlier this month: “We believe there should be meaningful debate about the legitimate and important issues that the protesters are raising, and we’re looking to the Iranian authorities to permit that.”

The demonstrations in Iran are the most widespread since crowds took to the streets over a disputed presidential election in 2009. They began initially over price rises and corruption, but have grown into a wider display of anger towards the government and ruling clerics.

Years of sanctions imposed by the international community over the country’s nuclear programme – despite recently being relaxed – have hit the Iranian economy hard.