You are here: Home / Mediterranean / Arrest warrants issued in Libya against 824 Islamic terrorist 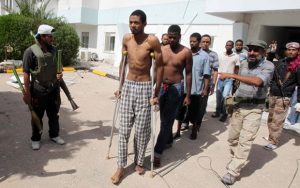 “Within the framework of investigations by the Public Prosecution on issues of terrorism and threats to state security, arrest warrants have been issued against 824 terrorist suspects. Their names have been circulated to border checkpoints for necessary actions,” Attorney General’s chief investigator, Al-Seddiq Al-Sour, told Xinhua.

“The Interpol issued international arrest warrants against some of those suspects,” Al-Sour added.

These names came up during the investigations with arrested terrorists from different cities of the country, Al-Sour confirmed.