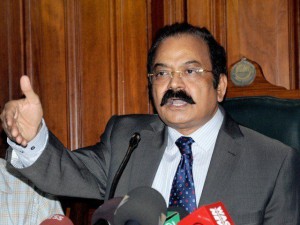 “Hundreds of people from different countries have fled to Iraq and Syria to join Da’ish. However, only a very few Pakistanis have left the country in hopes of joining the militant organization,” Sanaullah said while speaking to media representatives in Faisalabad.

The law minister vowed to strengthen the security institutions to help curb any influence of the Islamic State in the country, saying those rounded up from Daska last month were preparing to leave for Syria.The Pakistan Muslim League-Nawaz (PML-N) leader further revealed that all nine suspects belonged to Jamaat-ud-Dawa (JuD), a local charity organisation which was put on UN terror blacklist in December 2008 for allegedly carrying out deadly attacks on the Indian city of Mumbai.

Further, Sanaullah requested the Leader of Opposition in the National Assembly Syed Khursheed Shah, who had earlier raised concerns regarding the Islamic State’s recruitment drive in the country, to provide the IS’ recruiting list to the government so that action could be taken against those involved in it.