Austria will deploy troops to its borders this weekend in a bid to stem the flow of migrants crossing into the country, in the wake of a string of sex attacks blamed on immigrants. 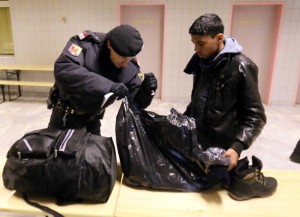 The tough new rules are part of a plan to stop the open-door policy for asylum seekers and come in the wake of the assaults in Germany on New Year’s Eve.

Stricter checks have already started to see migrants being turned back, with Austrian police saying 3,000 migrants have already been rejected at its borders.

Many are being refused entry because their paperwork is forged or they have lied about their identities.

Fears have been heightened about the use of fake documents to cross Europe’s borders after false passports were used by terrorists involved in the Paris terror attacks to enter from Turkey.

Austria and neighbouring Germany and Slovenia are trying to bring borders back under control after months of often unrestricted movement.

Those plans include a significant army presence on Austria’s southern borders with the plan to make soldiers “clearly visible” to prevent those trying to cross illegally into the country.

An unnamed official said: “We need to enforce the fact that we are credible, and the protection of our borders as a priority. And this is exactly what the population wants.”

Austria has complained in the past Germany is sending failed asylum seekers back into Austria.

Interior Minister Johanna Mikl-Leitner said: “What is the situation currently on the German-Austrian border? That only those who want asylum in Germany are being let through, and those who want to travel onwards are sent back.

“We will stop them directly on our southern border as of the end of next week.”

Parliamentary party leader from the conservative People’s Party, Reinhold Lopatka, said: “Previously we had 3,000 refugees, but last year it was 90,000. We won’t survive another year with that level coming into the country.”

Elsewhere, Austrian officials are investigating sex attacks by underage asylum seekers on three schoolgirls which went on for months without anybody taking action.

The four boys had been given places in the school where they apparently started assaulting girls but it was only after the New Year attacks in Cologne that one of the victims, aged 14, finally made a complaint to police.

That resulted in the three youngsters from Afghanistan, aged 14, 15 and 16, as well as a Syrian also aged 16, being suspended.

Austria’s border crackdown is the latest evidence of a creeping militarisation of Europe.

Sweden this week hinted it could reintroduce conscription to boost the size of its army.

Foreign Minister Margot Wallström said a larger armed forces would better be able to deal with traditional conflicts as well as responding to natural disasters and conducting search-and-rescue missions.

A poll conducted at the beginning of January found 72 percent of the Swedes supported the reinstatement of national service, while just 16 percent opposed it.

Russia has also vowed to beef up its military presence by increasing the number of troops along its border with Europe.