You are here: Home / MidEastGulf / Army arrests lebanese and foreigners in anti-extremism sweep 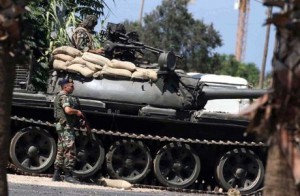 The Lebanese army announced on Thursday the arrest of Lebanese citizens and foreigners suspected of belonging to armed groups and terrorist organizations.

Lebanese Abdullah Mahmoud Massoud and his brother Azzam, in addition to Ali Ahmed al-Abdo and Odai Ahmed al-Obaid, were apprehended during a raid that an army unit carried out in the area of al-Zahrieh in the northern city of Tripoli on Wednesday night.

The army said in a communique that the unit seized rifles, guns, rocket launchers, hand grenades and military gear during the raids.

In the area of Haret Hreik in Beirut’s southern suburbs, the military arrested Palestinian Ali Mohammed al-Abed, who is wanted on suspicion of tossing grenades and opening fire on several occasions in Borj al-Barajneh last year, said the communique.

Troops also arrested several Syrians during raids in the areas of Torza in Koura, Labweh in Baalbek and the Metn town of Jdeideh, it said.

According to the army, the six Syrians are suspected of belonging to terrorist organizations.

The communique also said that soldiers have arrested ten other Syrians for entering the country illegally.