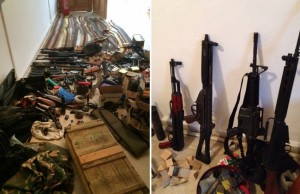 The Lebanese Army said Thursday it had arrested five individuals, including two men suspected with links to terror groups, during raids in north Lebanon.

A military statement said the two suspects were arrested during separate raids late Wednesday on a sawmill and a grocery store in the Tripoli neighborhood of Beddawi.

It said an amount of rifles and pistols, ammunition, hand grenades, mortar bombs as well as communication devices and a variety of military equipment were seized by the Army after the raids.

The statement said three individuals were also arrested for attempting to hinder the Army’s effort and assaulting members of the military patrol.

The detainees were referred for interrogation.