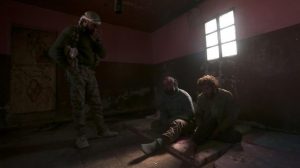 Armenia has accused Turkey and Azerbaijan of seeking to give the conflict in Nagorno-Karabakh an inter-religious character by bringing in jihadists from the Middle East to fight there.

In a statement released on November 1 Armenia’s Ministry of Foreign Affairs said that at least two mercenaries from Syria had been captured by Nagorno-Karabakh’s ethnic Armenian defense army during the fighting with Azerbaijan in the region.

Nagorno-Karabakh’s de facto ethnic Armenian authorities showed videos of two men whom said they had been recruited in Syria by Turkey to fight for Azerbaijan for a monthly pay of $2,000. One of them said they were also promised an extra payment for each “beheaded infidel.”

“The transfer of jihadists to the Nagorno-Karabakh conflict zone reveals the intentions of the Turkish-Azerbaijani leadership to give the conflict an inter-religious character,” Armenia’s ministry said.

“This is a completely new manifestation of the expansion of terrorism, when foreign terrorist fighters and jihadists from the Middle East have been deployed to the conflict zone in the OSCE area; it is a serious threat to international and regional security and stability,” the statement added, stressing that “Armenia will continue to undertake consistent steps in the fight against international terrorism, in that regard cooperating with all interested partners.”

Russia, France, the United States, Iran and other countries and international organizations have also voiced their concern about credible reports of Syrian mercenaries being involved in the Nagorno-Karabakh fighting.

Azerbaijan and Turkey have denied recruiting any mercenaries to fight in the Nagorno-Karabakh conflict zone, instead accusing Armenia of having PKK (Kurdish Workers’ Party) fighters and other mercenaries fighting on its side, a claim discarded by Yerevan as groundless.

Yerevan’s arguments on the presence of mercenaries on the Azerbaijani side have also been supported by multiple investigative reports by Western journalists, some of which alleged that Turkey began recruiting jihadist fighters to be later deployed in Azerbaijan as early as July.

In an interview with RFE/RL’s Armenian Service (Azatutyun) last month one such journalist, Lindsey Snell, estimated that the number of Syrian mercenaries fighting for Azerbaijan at one point was around 2,000.

According to the Syrian Observatory for Human Rights (SOHR), a UK-based human rights organization, at least 217 Turkish-backed Syrian mercenaries have been killed in the fighting in Nagorno-Karabakh.