You are here: Home / MidEastGulf / Armenia parliament speaker: We will be at brotherly Syria’s side 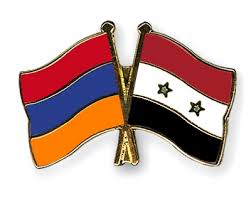 The Armenian parliamentarians will continue standing with brotherly Syria in all international platforms.

President of the National Assembly (NA) of Armenia, Galust Sahakyan, on Wednesday noted the aforesaid at his talk in Geneva, Switzerland, with speaker Mohammad Jihad al-Laham of the People’s Council (parliament) of Syria.

Their talk was held along the lines of the 133rd Assembly of the Inter-Parliamentary Union.

The Armenian NA leader, speaking on Armenian-Syrian parliamentary collaboration, said the Armenian MPs regularly visit Syria and provide detailed information to him regarding the situation on the ground.

Galust Sahakyan added that one of the reasons for the absence of a full condemnation of the Armenian Genocide and other genocides is the fact that wars and several other phenomena with the characteristics of genocide still exist.

Al-Laham, for his part, specifically stated: “We are grateful [to Armenia] for being at our side, assisting us. Please convey Syrian President Bashar al-Assad’s thanks to the President of Armenia, Serzh Sargsyan.”

The Syrian parliament leader also invited Sahakyan to his country.