British Transport Police have said: “We hope they will provide a reassurance that they are there and are able to respond whatever the threat may be” 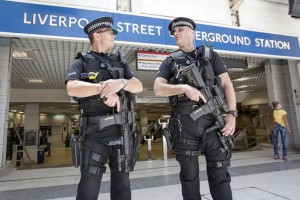 Armed police officers will be travelling on the underground network for the first time since the 7/7 bombings amidst London’s terror threat levels being escalated.

British Transport Police (BTP) have taken the decision for officers to be on the tube in between jobs rather than travel overground to get around the capital.

Under the new proposals, dog units will also travel underground, rather than being transported in vans.

It comes after Metropolitan Police officers charged 19-year-old Damon Joseph Smith after a “suspicious package was left on the Jubilee line” .

The London Metropolitan University student has been accused of unlawfully and maliciously making or possessing an explosive substance with intent to endanger life or cause serious injury to property.

He has not yet entered a plea and was remanded in custody until a hearing at the Old Baily on November 17.

The dramatic seize led to road closures in the north London area by the station as the operation took place.

BTP’s Deputy Chief Constable Adrian Hanstock said: “They will stand out and people will see them.

“We hope they will provide a reassurance that they are there and are able to respond whatever the threat may be.”

In August, the Met launched Operation Hercules which saw 600 more armed police hit the streets as part of a pledge to protect Londoners.