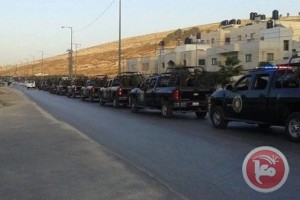 Armed men opened fire at the Palestinian president’s guards while in their vehicle in the al-Quds Street near Balata refugee camp outside of Nablus late Tuesday.

Palestinian security sources told Ma’an that a presidential guard, ranked as major and from the Asira al-Shamaliya village, was driving the vehicle at the time.The vehicle was hit with seven bullets before the armed men fled the area.

No injuries were reported.

Sources told Ma’an that security services formed a committee to investigate the details of the incident.Altercations between residents of the Balata refugee camp and Palestinian security forces have been on the rise, most recently following a security campaign launched by the Palestinian Authority in February 2015.

The campaign allegedly targets criminal activity such as drug dealing and illegal possession of weapons, however some residents in Balata argue they are being disproportionately targeted and receive unequal treatment under the law.

The governor of Nablus declared that 18 wanted criminals were hiding in the camp at the start of the campaign, and attempts by Palestinian security forces to make the arrests have resulted in injury of bystanders in the cramped camp.March and April witnessed near daily clashes between PA security forces and gunmen and youths from the camp, according to locals.

During one incident, two children sustained gunshot injuries during an exchange of fire between gunman in the camp and Palestinian security officers.Palestinian Legislative Council Member Jamal al-Tirawi told Ma’an at the time that responsibility lay with President Mahmoud Abbas and Prime Minister Rami Hamdallah to prevent the situation in Balata from deteriorating further.