If the Islamic State group is to be defeated and prevented from reappearing under some new guise, the root causes behind its birth and growth must be addressed, American experts say. 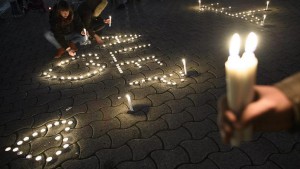 In the face of an uprising that has catalysed and channeled anger, frustrations and resentments of a significant part of the Sunni world, a uniquely military response will never suffice, however impressive its gains on the ground, according to terror experts.

And yet the underlying problems in many parts of the Arab world – starting with chaos, poor governance and poverty – run deep.

With places like the besieged Syrian city of Aleppo descending into chaos, no easy solutions are in sight.

Widespread new unrest in dire proportions seems a near certainty, and only an extraordinary campaign of ideological pushback might eventually provide relief, said experts Wednesday during an annual conference in Washington on terrorism.

“With the new US administration coming, there is an instinctive – ‘We got to be tougher,'” former CIA chief Michael Hayden said at the conference, sponsored by the Jamestown Foundation think tank.

“But if it was about our ability to kill people, we’d have been done 14 years ago.”

“If we do nothing except get tougher, we’ll have to get tougher multiple times in the future,” he added.

Like several other terror experts, Hayden, who also once headed the National Security Agency, insisted that until the underlying causes that prompt young Sunni Muslims to join jihadist movements are addressed, the attraction of radical Islam will endure and the ranks of its fighters and leaders will continually be replenished.

Bruce Riedel, a former CIA analyst and counterterrorism expert now with the prestigious Brookings Institution, stressed the limits of what he called a “decapitation strategy” aimed mainly at the leadership of groups like IS or Al-Qaeda.

“It’s not a strategy to address the underlying problems that created Al-Qaeda, or the Islamic State, or Boko Haram,” he said.

“Those problems continue to endure and will be the major challenges the new US administration faces.”

The first challenge, he said, “is the Arab world: today, it is in chaos. It is descending into an abyss of hell that we are only beginning to see the outlines of.

“As bad as Aleppo is, as bad as Mosul is, I think it’s almost certainly going to get much worse.”

He said he saw “no sign” that the chaos that has appeared since the Arab Spring uprisings of 2011 was coming to an end.

While the Arab world accounts for only five percent of Earth’s population, he said, nearly half the acts of terrorism last year were in Arab countries. At the same time, key indicators like youth unemployment remain sharply negative, with little reason to expect improvement.

“The depressing thing is that none of the reasons that produced the Arab Spring – bad governance, bad economic performance, high unemployment, lack of accountability in government, police behavior, lack of openness for citizens to express their views – not a single one of those has been addressed to any significant degree,” Riedel said.

The ‘deep fight’ ahead

To Katherine Zimmerman of the American Enterprise Institute, this grave socioeconomic picture is made worse by the fact that both Al-Qaeda and the IS group – which have clashed at times and cooperated at others – enjoy a growing number of safe havens.

“The problem is that we have counterterrorism strategies and not counterinsurgency,” she told AFP.

She said the West’s “Band-Aid” approach, working through local partners and relying on air strikes against militant leaders, was “in many cases making the problem worse.”

What is needed, said Hayden, is to undertake “the deep fight,” which he said is “always ideological.”

“We did that during the Cold War: We undercut the Communist ideology. And it worked,” Hayden said.

But, he added: “Communism was not alien to you and me. It’s a Western philosophy, created by a German in London. It’s ours. We had legitimacy. But we do not have legitimacy for the deep battle against radical Islam.”

“Our influence in this deep fight is very limited.”