You are here: Home / Europe / Armed British Transport Police being trained to storm trains to tackle threat of terrorist gunmen on the Tube 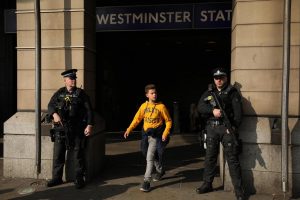 Armed police are being trained to storm Tube carriages to tackle the threat of marauding terrorist gunmen on London Underground trains, a senior officer said today according to standard.co.uk.

Specialist firearms officers are ready to respond to threats ranging from fanatics hijacking ships on the Thames to gunmen attacking passengers on trains or the Underground.

Simon Chesterman, the national lead for armed policing, said there was a new “potent” force of armed officers in London and the UK prepared to intervene within minutes of an attack.

The new tier of top-level firearms officers train alongside special forces and use tactics which are more akin to the military, he said.

Police reviewed their tactics after a gunman attempted to open fire with an AK47 on a crowded Amsterdam to Paris express train near the French city of Arras in 2015.

The gunman was overpowered by three American citizens, two of whom were off-duty soldiers, and a British grandfather.

Mr Chesterman added: “We have looked very carefully at it. We know now what to do and how to do it.”

In addition, the number of specialist and trained firearms officers has increased in a major “uplift” across the UK.

In London, the Met launched a cadre of Counter Terrorist Specialist Firearms Officers last year, while the number of armed response vehicles on patrol in the capital has more than doubled.

The Met now has more than 30 armed response cars in London, an increase of 19, with around 90 extra firearms officers to crew the vehicles.

They are used to patrol gun crime hotspots in London as part of their regular duties, but are in the front line for any response to a terror attack.

Mr Chesterman was speaking weeks after fanatic Khalid Masood killed four people when he drove through crowds on Westminster Bridge at high speed before fatally knifing police officer Keith Palmer as he stood guard at the Palace of Westminster.

The attack followed atrocities across Europe in Paris, Brussels, Nice and Berlin in recent years which have caused scores of deaths and injuries.

Among the new tactics in use by armed police is a new order to shoot to kill any lorry driver at the wheel of a lorry being used in a terrorist attack.

“We used to talk about not shooting at a moving vehicle because of the danger we might cause if we fired at a driver.

“But if the vehicle is being used as a weapon in the first place, there aren’t many tactics available in relation to stopping it, particularly a very large lorry.

“Driving a vehicle in front of it for example is not going to stop it. So you need to shoot the driver.”

Police were now equipped with the right weapons and ammunition to penetrate doors and windows, he added.

The new training is part of a major increase in the number of firearms officers in England and Wales which will see total numbers rise to around 10,500 by next year.

However, because the number of armed police has fallen in recent years, the new total will bring the number back to that of 2010.

Mr Chesterman warned that there was a “perfect storm” brewing in the background, which could hit efforts to attract the best candidates to armed policing and retain current personnel.

He cited factors including concerns among firearms officers that they will be treated as suspects rather than professional witnesses if they are involved in police shootings.