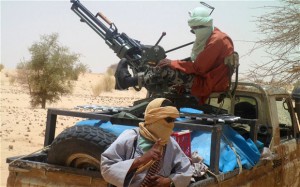 A group of armed militants raided the town of Misseni, in the Sikasso region of southern Mali near the border with Côte d’Ivoire.

According to preliminary statements from the Army Information and Public Relations Unit, the assailants shouted “God is Great” in Arabic, temporarily raised a flag with an Ansar Dine inscription and shot at security targets.

The incident resulted in the death of a gendarme and arson attacks on two vehicles belonging to the army and some police motorcycles. Islamist groups often take a couple of days to weeks to claim responsibility for such attacks.