You are here: Home / Analysis / Are we responding to terrorism in the ‘wrong’ way?

How the ‘terrorised’ respond can give ammunition for terrorism to continue, argues Ian Roberston. 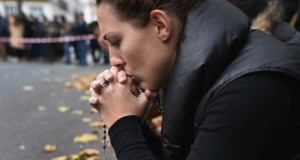 The way we respond to terrorist incidents is critical to whether terrorism proliferates or not, according to Prof Ian Robertson, professor of psychology at Trinity College Dublin.

“Terrorism is a form of mass mind control. It is a rationally, carefully planned activity, neither psychotic nor random whose aim is to change behaviours, emotions and thinking to help achieve the goals of terrorism,” Robertson told a public discussion on the changing nature of terrorism in the 21st century in the college last month.

More specifically, Robertson was keen to point out that if we – the “terrorised” – respond in the “wrong way”, we give ammunition and justification for terrorism to continue.

“But, what did surprise me was that the biggest change in attitudes happened in those with more liberal outlooks.

“These terrorists want to create a situation where the narrative is of a crusader conspiracy across the world to persecute Muslims. And when the most liberal in society – potentially the greatest supporter for the prevention of alienation of minority groups – change, this results in the fringe minorities of that minority group attracting more young men and women who feel alienated from society.”

You might need to read that last paragraph twice to understand fully how our response to terrorism can “fuel the fire”. Robertson also said that once these alienated young people find their cause, they feel much better.

“Oxytocin, the social bonding hormone, is released during this in-group bonding which has a dehumanising effect on the out-group. The sense of alienation lifts and these people have a sense of purpose and meaning. But, with this comes a tendency to treat the out-group as objects and it’s easier to bomb an object than a person.”

Then, according to Robertson, the more bloody, cruel and apparently random the target the better.

“When women and children are killed rather than soldiers or policemen, the sense of shock and outrage that follows burns itself into people’s brains much more and causes us to over-estimate the frequency of these events, creating an illusion that they are more common than they actually are.

“The absolute risk of being killed in a terrorist incident is much lower than we often think.”

Iranian born Roja Fazaeli, assistant professor of Islamic Civilisations at Trinity, has a specific interest in the rising number of female suicide bombers.

“There has been a significant rise in the numbers of female suicide bombers in the Middle East since 2002.

These women complicate the hyper-masculine image of Islamic extremists, challenging the view of women as a protected social and religious group.”

According to Fazaeli, some perceive female suicide bombers as achieving “tactical surprise”. Another theory is that female recruits are filling a void due to male casualties while others argue that it is a “radicalising and shaming tool used by terrorist groups to motivate men to join the movement”.

Fazaeli said it was also worth questioning why this public discussion was limited to terrorists using Islam as their justification for terrorism when, in the past, leftist and secularist groups had different motivations for terrorism.

It was very important to understand the wide differences between Muslims throughout the world, she said. “In fact, in Ireland, we have one of the most diverse groups of Muslim people because Ireland wasn’t a coloniser.”

Sri Lankan Jude Lal Fernando, assistant professor of intercultural theology, was keen to draw attention to the false views that the world is now divided into the secular Western world’s war on terror and the fundamentalist Islamic terrorist movement.

“The terms ‘war on terror’ and ‘terrorism’ refer to political violence of different kinds which create a division between the ‘liberal and secular’ West and the ‘illiberal and religious Middle East’,” he said.

The truth is much more complex, according to Lal Fernando. “Old enemies have become new friends and old friends have become enemies. Secularists have joined hands with religionists, liberal states have allied with conservative religious states,” he said, giving a whistle stop tour of historical allegiances between Western governments and Middle Eastern countries.

“I can’t separate victims in the Paris attacks from victims in Beirut, Ankara and the Muslims killed by the Russian and American air strikes in Syria. ”

Finally, Neville Cox, associate professor of law, said it was very difficult to support the view that there was an inherent link between the teachings of Islam and terrorism anymore than there might be between the Jewish scriptures of the Old Testament and terrorism.

“Jihad doesn’t mean war or violence, it means struggle, firstly a struggle with oneself and one’s inner demons. It only becomes an offensive force as a self-defence and then only as a last resort. The majority of Muslim leaders don’t endorse the view that Islam endorses terrorism.

“There is no doubt that Muslims engaging in acts of violence can find support for what they do within individual verses of the Qur’an.

“However, such an interpretation is highly controversial and should not be used by the Western media to assume there is a genuine link between Islam, the religion and terrorism.”