You are here: Home / MidEastGulf / Are Islamic State missiles a threat to RAF? 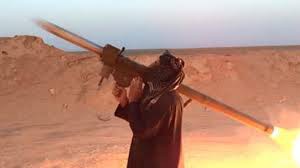 We now know that they have at least the technology, if not the ability, to shoot down aircraft.

But how concerning is this for the coalition planes flying bombing missions over Syria and Iraq?

Will IS actually be able to shoot down US, French or British fighter jets?

The RAF Tornados and Typhoons fly at around 20,000 feet. Drones operate at a similar altitude. Shoulder-borne surface-to-air missiles, MANPADS, have a range of 12,000 feet, putting coalition aircraft out of reach.

The main threat therefore, would be to helicopters or during an aircraft’s take-off and landing – the point at which they are most vulnerable.

During operations in Afghanistan, guards, usually from the RAF regiment, would patrol and secure the perimeter of Kandahar and Bastion airfields to prevent Taliban insurgents from targeting planes.

Surveillance balloons would keep watch over the bases and surrounding areas too.

This precaution isn’t necessary during current anti-IS operations because all aircraft are stationed inside friendly territory: Cyprus, Turkey, Kuwait, Jordan, UAE and aircraft carriers in the Gulf.

Heightened airfield security is in practice, however, because of the situation.

If an aircraft is targeted by a surface-to-air missile, it has a suite of defensive options it could use to divert the attack.

Onboard detection systems will identify the MANPAD radar before a missile is even launched, giving the pilot time to take evasive action or prepare for an attack.

If a missile is fired, the pilot could send out chaff and flares.

Chaff is basically tin foil, cut into thousands of small pieces. It reflects radar signals and effectively hides the aircraft in an electro-magnetic cloud, confusing the tracking mechanism on the radar-guided missile.

Flares are effective against infrared-guided missiles. These weapons seek a heat source, so they are attracted to the hot spots on a plane, in particular the jet engine nozzles and exhaust.

One of the features of stealth aircraft for instance, is a low heat signature.

Flares create sudden bursts of intense heat, hotter than anything the aircraft is giving off itself. This acts as a decoy to the missile, again confusing its tracking system and, ideally, diverting the threat away.

A classic manoeuvre is to fire off the multiple flares and chaff then make a rapid turn away from the threat, and reduce engine power to lower the thermal signature of the aircraft.

Commercial aircraft don’t have these defence measures, but having this weapon in Raqqa is one thing, getting it to and using it at a major European airport against an international airline, is some leaps away for IS yet.

It’s all very well obtaining a surface-to-air missile system, but you need to know how to operate it. Just because you own an F1 car, doesn’t mean you can drive it properly.

The video obtained by Sky News doesn’t show Islamic State fighters actually using the shoulder borne surface-to-air missile, but we do see them demonstrate a worryingly advanced knowledge of the way it is put together, and that, at the very least, suggests a degree of competency.