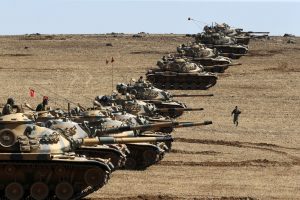 Arab states have condemned the Turkish invasion in northeastern Syria against the Kurdish forces in the region which was started on Wednesday afternoon.

Saudi Arabia has released a statement to condemn Turkey’s incursion into Syria, an official source in the Foreign Ministry told State TV, adding that the Syrian people, the country’s sovereignty, and territorial integrity should be protected.

The UAE has also strongly rejected the Turkish military campaign against the Syrian Kurdish forces, followed by Egypt, Jordan, Kuwait, and Bahrain with similar condemnations.

Earlier on Wednesday evening, the major European countries, including France, Germany, the UK, Belgium, and Poland called for a UN Security Council meeting to discuss the Turkish incursion into Syria.

Turkey has launched the long-planned operation against the Kurds in Syria since Wednesday afternoon, while several civilians have reportedly been killed due to the continuous bombardments in northeastern parts of the country.