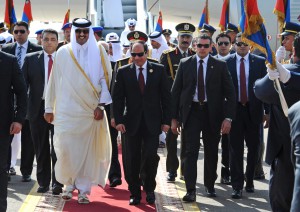 Arab military chiefs of staff invited a high-level military team to study all aspects and procedures for forming a joint Arab force following their meeting in the Egyptian capital Cairo.

The Arab chiefs of staff met on Wednesday at the Arab League (AL) headquarters in Cairo to discuss the formation of a joint military force as approved by Arab leaders in their latest summit held in Sharm El-Sheikh resort city in Egypt.

The team will also study the executive procedures, the mechanisms, the budget and the legal framework required for the establishment and formation of the intended joint Arab military force, according to the statement.

The statement added that the team is to convene “within the coming few weeks” and the result of the meeting will be reviewed by the Arab chiefs of staff in their coming gathering.

Earlier on Wednesday, Egypt’s Chief of Staff Mahmoud Hegazy, who led the meeting, said in his opening statement that the main purpose of the Arab military bloc is to combat growing terrorism in the region and protect Arab national security.

“Our meeting comes in activation of the historical decision made by Arab leaders at Sharm El-Sheikh summit to protect joint Arab national security,” said the Egyptian chief of staff and deputy chairman of the country’s military council.

Hegazy added that a unilateral confrontation of national army to contain a crisis proved insufficient in many cases, which urges the need for a collective mechanism through the intended Arab military force.

“The force will be ready for immediate intervention when necessary and at the request of the concerned country without affecting its sovereignty and independency,” he clarified.

For his part, AL Secretary-General Nabil al-Araby said that the force is to be “multi-functional,” capable of immediate intervention to combat terrorism, assisting in peacekeeping missions, securing humanitarian aid operations, protecting civilians in addition to cooperation in national security issues.

He noted that the Arab military force will be established in accordance with the charters of the AL and the United Nations that it is not against any state.

Seven of the 22 Arab states have not been represented by chiefs of staffs in Wednesday’s meetings, either for their disapproval or for having military and security issues, including Algeria, Iraq, Somalia, Palestine, Comoros, Yemen and Syria whose AL membership has been suspended over its unrest that erupted in mid-March 2011.

The bid for forming a joint Arab force has come while a number of Arab states are facing turmoil and unrest including Syria, Libya, Iraq and Yemen amid growing terrorist activities in the region.