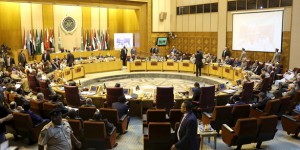 The Arab League, which has 22 members, has condemned Turkey‘s operations against the terrorist Kurdistan Workers’ Party (PKK) in northern Iraq, with only Qatar underlining that Turkey has the right to protect its borders.

Nabil al-Araby, secretary-general of the Arab League, an organization of Arab countries in and around North Africa, the Horn of Africa and Arabia, condemned the military operations.

The Turkish Armed Forces (TSK) started bombing PKK targets in northern Iraq, after the PKK assassinated two police officers on July 22 in retaliation for the state failing to prevent a suspected Islamic State in Iraq and the Levant (ISIL) militant detonating a suicide bomb in Suruç a town in Şanlıurfa province, killing 32 and injuring more than 100 people.

The TSK has since been bombing PKK depots in the Kandil Mountains. Ankara has also arrested hundreds of alleged PKK sympathizers across Turkey.

Araby called on Turkey and Iraq to increase cooperation in order to preserve peace in both countries in a press statement according to a report by the Kuwait News Agency (KUNA).

Only Qatar expressed its reservations about the condemnation.

In a statement published by the Qatar state news agency on Tuesday, the Foreign Ministry clarified that the Arab League’s statement on Turkey’s strikes in Iraq was issued without consultation with the regional bloc’s members, according to a report in the Qatari news agency Al Jazeera.

Qatar stands by Turkey’s right to defend its borders and interests against any threats, the statement said, according to Al Jazeera.