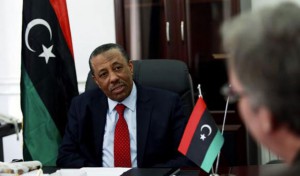 They also vowed necessary aid to the Libyan army in its ongoing mission to eliminate terrorism and restore security in the country.

In the final communique of their the two-day 26th Summit in Sharm El-Sheikh, Egypt, Sunday, Arab leaders called for respecting Libya’s unity, sovereignty, and its territorial integrity, expressing their rejection to any outside intervention in its interior affairs.

They urged Libyan political parties to commit to dialogue and renounce violence and radicalism, demanding the UNSC to lift arms embargo on the Libyan government in order to enable the Libyan national army to fight terrorism in the country.

They stressed the importance of supporting the political process in Libya under the supervision of the UN special envoy to Libya Bernardino Leon, demanding the international community to bear its responsibilities towards preventing the sea and air flowing of arms to terrorist organizations.

Meanwhile, Arab leaders strongly condemned the brutal crime committed against innocent Egyptian citizens by the Islamic State militants in Sirte city, as well as recent terrorist explosions by the terrorist group in Qubbah district that killed dozens of Libyan and Egyptian citizens.