You are here: Home / Europe / Arab immigrants in Bosnia follow ideology made notorious by Daesh 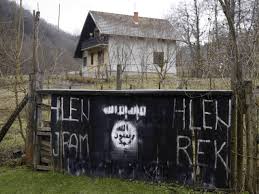 Those who moved to Bosnia and Herzegovina from the Arab world, primarily the Gulf states, follow Wahhabism and Salafism, movements within Sunni Islam given a bad name by terrorist groups, including al-Qaeda and Daesh.

“There is clearly nothing wrong with Arabs flocking to Bosnia. However, the issue is that approximately 30 percent of the newcomers follow Wahhabism and Salafism, primarily known because organizations like al-Qaeda and Daesh adhere to these movements,” she said.

According to some estimates, more than 40,000 Arabs live in the capital of Sarajevo, Ristic added.

“The Ministry of Security is aware of these numbers. It has carried out investigations targeting real estate companies and other businesses established by the Arabs in Bosnia. As a result, 30 nationals from Arab countries were deported from Bosnia and forbidden to enter the Balkan nation due to their ties to Daesh and other radical groups,” she detailed.

Arab immigrants coming to the Balkan nation “are purchasing lands and real estate en masse” in Bosnia and Herzegovina, Ristic said, adding that the deals are brokered by companies that belong to Bakir Izetbegovic.

Ristic was referring to the Chairman of the Presidency of Bosnia and Herzegovina and the president of the Party of Democratic Action (SDA). Izetbegovic recently said that Sarajevo would challenge the International Court of Justice’s 2007 ruling that cleared Serbia of genocide charges relating to the Bosnian War which broke out in 1992 and lasted until 1995.

“Media outlets in Bosnia have engaged in guess work on why Izetbegovic was ‘rocking the boat.’ His enormous personal wealth, including two apartments in Istanbul, a villa in Bosnia, a shopping mall in Sarajevo and offshore companies, has been mentioned as the key reason,” she explained. “Some media outlets think that he received the majority of his assets during the war through assistance that Saudi Arabia and other Muslim nations provided to fellow believers.”

Sarajevo-based political analyst Zlatko Hadzidedic suggested that the Bosniak politician was not acting in the best interests of Bosnia or its people since any activities which have not been coordinated with other institutions are detrimental to the country.

“Any potential benefits from finding Serbia guilty of the Srebrenica massacre are nothing compared to the risk of ruining government institutions in Bosnia,” he said.

Other members of the tripartite Presidency of Bosnia and Herzegovina do not support Izetbegovic’s initiative.