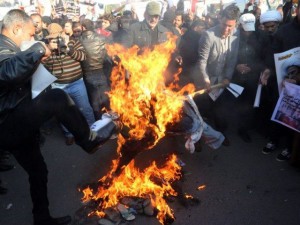 A meeting of Arab states in the Gulf Cooperation Council (GCC) to discuss the growing confrontation between Saudi Arabia and Iran ended in full support for the Saudi position, and any measure any measure against Iran to halt Tehran’s “terrorist acts” and to ensure that it refrains from “meddling in the affairs of Arab nations.” However, no concrete action was taken or committed.

The Kingdom is looking at additional measures to be taken, if Iran continues with its belligerent policies. […]

We cannot deal with a country that attacks and burns embassies, whether those embassies are British or American, or for that matter Saudi.

If it is a nation state, it should act like a responsible state. If not, it will be further isolated.

The escalation is coming from Iran, not from Saudi Arabia or the GCC. We are evaluating Iran’s moves and taking steps to counter them … things will be clearer in the near future. …

It is entirely in the hands of Iran, whether it wants to be a good neighbor or it prefers to remain in a hostile environment within the region.

Regrettably, immediately after the successful conclusion of the first interim nuclear agreement between Iran and E3/EU+3 in November 2013, Saudi Arabia focused all its resources to prevent or defeat a comprehensive deal, and preclude normalization in the region. Today, there are indications that some in Saudi Arabia are on a mission to drag the entire region to conflict, fearing that removal of the smokescreen of the manufactured Iranian nuclear threat would expose the real global threat posed by extremists and their sponsors.

It is an unfortunate reality that most extremist perpetrators of acts of terror from September 11, 2001 to the recent senseless terrorist shooting in San Bernardino and all other episodes of extremist carnage in between whether in Beirut, Baghdad, Cairo, Damascus, Istanbul and Peshawar, or in Paris, London, Moscow, Madrid and Ottawa – and most members of Al-Qaeda, the Taliban, ISIS and Al-Nusra Front were either Saudi nationals, or those mis-educated in Saudi financed schools or otherwise brainwashed by petro-financed demagogues, who have promoted an anti-Islamic message of hatred, exclusion and sectarianism across the globe for decades.

Saudi Arabia has called an emergency meeting of all 22 countries in the Arab League, to meet in Cairo on Sunday (today). Arab News (Riyadh) and Tehran Times

According to Fawaz Gerges, Mideast expert at the London School of Economics, interviewed on Al-Jazeera on Saturday, Saudi Arabia views Iran’s penetration in the Arab world in Syria, Iraq, Bahrain, Yemen and Lebanon to be an existential threat to Saudi Arabia, and so the Saudis have made a strategic decision for all-out confrontation with Iran.

However, the confrontation has deeply divided the Arab world, and split the countries into three blocs, according to Gerges:

Gerges points out that the Saudis believe that their “strategic partner,” the United States, has let them down and sided with Iran against them, allowing Iran to gain the upper hand in the region. For that reason, the Saudis did not consult with the US before deciding to cut diplomatic relations with Iran.

Meanwhile, according to Gerges, the Obama administration is very unhappy with the current Saudi-Iran escalation, because it diverts attention from the US agenda: to focus confrontation on ISIS, to find a diplomatic solution in Syria, and a ceasefire in Yemen.

From the point of view of Generational Dynamics, these objectives are pretty much fantasy anyway. Generational Dynamics predicts that the Mideast is headed for a major war between Shias and Sunnis, between Arabs and Jews, and between different ethnic groups. Events of the last year, including the war in Yemen, the rise of ISIS, the Russian military intervention in Syria, Iran’s nuclear deal with the west, and now the Saudi-Iran split, have moved this prediction much closer.