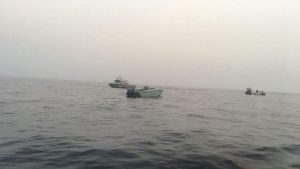 The Saudi-led Arab coalition thwarted a terrorist attack by the Iran-backed Houthi militias in the Red Sea, like reported by aawsat.com.

Coalition sources said that the militants sought to use a booby-trapped vessel in their attack.

The boat was launched from Yemen’s Hodeidah.

Houthis claimed through their media that their attack had succeeded and that the boat had sailed deep into Saudi waters, however, images obtained by Asharq Al-Awsat revealed that the vessel was seized and its explosives defused.

The Arab coalition warned that the Houthis and Iranian Revolutionary Guards were still a threat to international waters and global trade routes.

It stressed that it had taken all necessary measures to protect commercial ships passing through the area.

These measures were announced on August 5 soon after Saudi Arabia temporary suspended oil shipments in the Bab al-Mandeb Strait on the Red Sea.

The shipments were halted on July 26 in wake of a Houthi attack against two Saudi oil tankers.