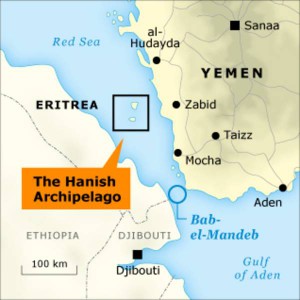 Arab coalition forces have captured a Yemeni Red Sea archipelago used by Iran-allied Houthis for storing and smuggling weapons into Yemen, the Saudi-led alliance and local fishermen said on Thursday.

The Saudi-led coalition has been trying to dislodge the Houthis and forces loyal to their ally, former president Ali Abdullah Saleh, from areas captured since September last year and to restore President Abd-Rabbu Mansour Hadi to power.

The Houthis control most of the former north Yemen from Taiz in the south to Saada in the north, giving them control of Yemen’s Red Sea coast.

The islands, it said, were controlled by Yemeni soldiers loyal to Saleh and used by the Houthis to store weapons and smuggle them into Hodeida, Yemen’s main Red Sea port.

Fishermen told Reuters by telephone that the islands had been subjected to weeks of heavy shelling by Arab forces before they were seized.

The archipelago was the subject of a territorial dispute between Yemen and Eritrea, which seized the archipelago in the 1990s, until a London-based international arbitration court granted Yemen sovereignty in 1998.