You are here: Home / Europe / Arab and North African mass assaults on German women, a clash of cultures exposed

A wave of violence rocked Cologne on New Year’s Eve, when more than 100 women reported that men of Arab and North African appearance robbed, groped and raped them. Though shocking in Germany, such attacks are all too common in Arab countries, where male power is fed by antiquated cultural norms. 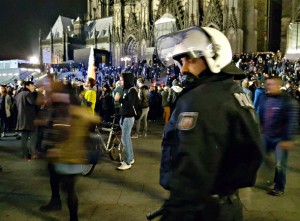 Hundreds of men banding together, assaulting, groping and even raping women. This kind of sexual violence that Cologne witnessed on New Year’s Eve is entirely new in Germany. The country was shocked when scores of women reported that gangs of men of Arab and North African appearance harassed, robbed and sexually assaulted them. In many cases, the mobs thwarted police attempts to reach victims. Germany’s justice minister has said that migrants convicted of these crimes could be deported if found guilty.

For the Middle East, instead, these kinds of horrific attacks against women are all too common, especially in Egypt. A study found that 99% of Egyptian women have experienced sexual assaults — at festivals, during Islamic holidays, in front of theaters and notably on Cairo’s Tahirir Square.

Gathering on Cairo’s central square has become a literal risk to life and limb for women. With each new gathering there, it seems the behavior of men becomes more animal-like. They push women, surround them, tear off their clothes, and even penetrate them with fingers, objects and knifes. Videos of these sickening assaults circulate on the Internet. Support groups distribute emergency numbers, patrolling to help women.

Some of the region’s other countries are less notorious when it comes to assaults in public places. But from Morocco to Bagdad, the terrible violence against women goes on.

Even the veiled don’t escape

What does this have to do with Cologne? A lot. The assaults are an expression of a deeply rooted aggressiveness against women, the fusion of sexual frustration and male power.

Cologne Mayor Henriette Reker recommends women keep “an arm’s-length distance” — a breathtakingly inadequate response that assumes keeping some distance is actually possible and, worse, that’s it’s up to women to prevent these violations from happening. As if there are attack-proof clothes, the perfect street, the inviolate time to go about one’s business. But experience demonstrates that nobody escapes these aggressions, not even the veiled Muslim women.

We don’t know yet whether the aggressors in Cologne were refugees or have been living there for years. Nor do we know if there were maybe even some native Germans among them. Fantasies of sexual violence are not a specific feature of foreigners. But it’s clear that cases of these kinds of extreme, and mass, cruelties are extremely rare in Germany. And they will remain the exception. The constitutional state has a duty to not only care for refugees, but also to protect Germans, men and women, and this should be made this very clear as quickly as possible.

What might take longer to overcome is centuries of culture based on misogynist education.