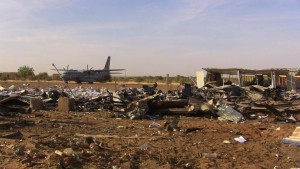 Militants have struck two airports in northern Mali with an explosives-laden truck and rockets, residents and a security source said on Wednesday, in attacks that caused no victims but pointed to desert jihadists intensifying their insurgency.

In Gao, the offices of the U.N. peacekeeping mission located next to the airport terminal were razed by Tuesday evening’s truck-bomb explosion which forced the airport to close.

French soldiers stationed in Gao took forensic evidence from among a tangle of papers, corrugated iron sheets and fragments of the attacker’s flesh and bones strewn out next to the runway.

Al Mourabitoun, a group closely linked to al Qaeda in the Islamic Maghreb (AQIM), claimed the attack on social media.

Gao — seized by Islamist militants in 2012 before French forces drove them out a year later — is considered the best secured town in northern Mali with multiple U.N., French and Malian army checkpoints along main roads.

A U.N. security source said that the attackers had passed through the regular checkpoints by using vehicles with a U.N. label. A spokesman for the 13,000-strong U.N. mission could not immediately confirm the information.

“Yesterday at about 18:00 (GMT) a vehicle with explosives destroyed our pre-fabricated installations of MINUSMA at the Gao airport,” said Olivier Salgado, spokesman for the peacekeeping mission, adding that another vehicle was being examined.

There were no fatalities beyond the attackers whose number has not yet been confirmed. The U.N. security source said two people on site were injured.

In the second incident, residents in Timbuktu said that rockets were fired overnight at the airport there but landed outside the perimeter, without causing damage.

Mali’s government signed a peace deal last year with secular armed groups but Islamist militants pledging allegiance to both al-Qaeda and Islamic State have fought on and launched dozens of attacks on Western targets in recent months.

Even the peace deal with secular fighters has been broken many times, adding to difficulties faced by U.N. forces in stabilizing the former French colony in West Africa.

A pro-government militia GATIA said on Wednesday that one of its vehicles hit a landmine, killing five of its fighters. Three Malian soldiers were also killed in an ambush a few kilometers outside of Gao on Monday, security sources said.