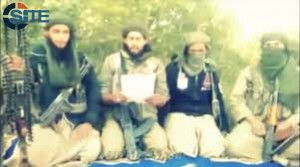 Yesterday, the Islamic State released an audio message from a group of jihadists claiming that al Qaeda in the Islamic Maghreb’s (AQIM) Al Ansar Battalion in Algeria had joined Abu Bakr al Baghdadi’s cause.

AQIM, which is al Qaeda’s official branch in North Africa, has now responded by releasing a statement of its own. (The statement can be seen on the right.) AQIM’s men downplay the defection, saying only a small part of the battalion was actually wooed by the Islamic State.

“The individuals who defected from the organization [al Qaeda or AQIM] and pledged bayat [allegiance] to the state organization…are fewer than 10,” he adds.

Abu Saheeb Osama finishes the statement with a warning to other jihadists about joining the Islamic State: “We call on all other mujahideen in the Islamic Maghreb especially, and the other areas of jihad in general, to sit on the book [referring to the Qur’an] and Sunnah [traditions of the Prophet Muhammad] to understand the Ummah’s predecessors. Renounce all that would distract and differentiate their group.”

Abu Saheeb Osama’s statement is a direct rebuttal to the Al Ansar Battalion fighters featured in the Islamic State’s message. Those fighters called on all members of al Qaeda and AQIM to put aside their doubts and join Abu Bakr al Baghdadi’s organization. The jihadist known as Abu Saheeb Osama obviously doesn’t approve.