You are here: Home / MidEastGulf / Anti-regime protests spread in Iran and Eastern Kurdistan

The anti-regime protests spread more in Iran and Eastern Kurdistan as Iranian police and soldiers kill 22, like reported by anfenglish.com 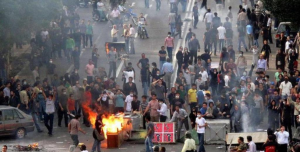 In Iran and Eastern Kurdistan, protests against economic policies of the government and oppression continue to spread on its sixth day. At least 9 people lost their lives during the demonstrations in Tehran, Isfahan and cities of Eastern Kurdistan. The total death toll of the protests raised to 22.

Two people, including a teenager, were killed in Humeynisehr as Iranian police opened fire on demonstrators in the city centre.

In Najafabad, a woman armed with a hunting rifle killed one Iranian soldier and wounded three policemen. A police checkpoint was run over by angry protestors in the neighbouring city of Kehderijan.

The number of detained exceeded thousands according to the opposition sources. The deputy governor of Tehran Ali Ashgar Nasserbaht said that 450 were detained in the city alone in the last three days.

In Eastern Kurdistan cities thousands took it to the streets on Monday night. Protestors clashed with police in Sine, Kermanshah and Dehloran.

According to local sources, two protestors were killed by Iranian soldiers in Sine and 75 were wounded.

In Kermanshah, protestors attacked police headquarters in the city and violent clashes continued all night.

Anti-regime protests were also reported in Erdebil, a city with Azeri majority.