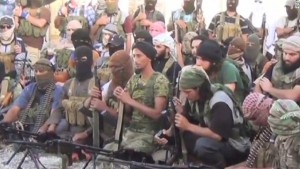 Officials from 20 countries involved in the fight against the Islamic State in Iraq and Syria (ISIS) are gathered in Quebec City this morning.

For the second time in two months, representatives are meeting behind closed doors to talk about how the the fight against ISIS can be improved.

On June 2, an anti-ISIS coalition conference was held in in Paris.

Thursday’s meeting, held at Château Frontenac, will include representatives from countries such as Australia, Saudi Arabia, Germany and the United Arab Emirates.

Foreign Affairs Minister Rob Nicholson will be at the conference, which is being co-chaired by Canada, the United States and Iraq.

“ISIS continues to present a serious threat to regional and global security, including a direct threat to Canadian citizens at home and abroad,” Nicholson said in a statement released earlier this week.

In March, Parliament passed a motion renewing Canada’s mission to fight ISIS for another 12 months and to include air strikes in Syria and part of its mission.

The conference will explore all aspects on the fight against ISIS, not just military initiatives. One example includes delving into how members of ISIS treat women and girls.

“Minorities and the women and girls targeted by ISIS are not incidental victims of terror but are deliberately selected by ISIS and are even used to recruit, encourage and reward its fighters,” Nicholson said.

Zainab Bangura, United Nations special representative on sexual violence in conflict, says the international community has to do more to prevent that from happening.

“The issue of sexual violence has been institutionalized by ISIS. The brutalization of women is part of their key strategy,” Bangura told CBC News on the eve of the conference.

She said naked women are sold at market like cattle, with manuals on how to sell slaves and deal with them.

Bangura says women and children make up 80 per cent of the refugees in the ISIS conflict.

At Thursday’s meeting, Bangura will make recommendations to the coalition, stressing that there cannot be peace in Middle Eastern conflict zones unless women are protected too.

“That is very central because women form the core of society, all the fabric of society together and I think we’ve neglected it to focus more on the issue of military and other assets.”

Nicholson said Canada supports efforts to prevent sexual violence in conflict zones, and is providing $8 million to the cause.

“Minorities and the women and girls targeted by ISIS are not incidental victims of terror but are deliberately selected by ISIS and are even used to recruit, encourage and reward its fighters,” he said, adding that financial aid goes to local and international organizations that support victims of sexual violence.