You are here: Home / Europe / Anti-Houthi Yemenis rally at UAE Embassy in London 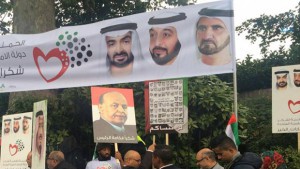 Hundreds of Yemenis in the UK have held a rally at the UAE Embassy in London to show support for the Saudi-led Arab coalition that is fighting to restore legitimacy to their country.

The demonstrators waved the flags of the UAE and Saudi Arabia, held up placards bearing pictures of the countries’ leaders and shouted slogans against the rebel Houthi group and militia loyal to the ousted president Ali Abdullah Saleh.

Firas Al Yafea, head of two pro-coalition campaigns to thank the two Gulf countries and editor-in-chief of Yemeni media organisation Al Hakika Press, stressed that their efforts to liberate Aden from the rebel militia will always be remembered by the Yemeni people.

He added that the demonstration shows gratitude to King Salman bin Abdulaziz Al Saud of Saudi Arabia and UAE President HH Sheikh Khalifa bin Zayed Al Nahyan for their efforts to save Yemen from the terrorism being perpetrated by the Houthis and their ally, former president Saleh.

Fawaz Hanbala, co-ordinator of the campaign supporting the UAE, said the demonstrators took to the streets to thank all those who conducted Operation Decisive Storm to save Yemen from the brutal, flagrant and wrongful aggression.

Abdul Rehman Al Mutaiwee, Ambassador of the UAE to the UK, received members of the #ThankYouUAE campaign.