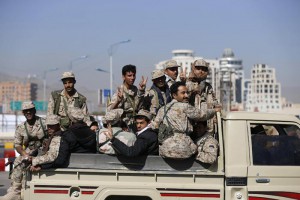 Ahmed Al Asiri, spokesperson of the “Decisive Storm” military operation, said that the Saudi-led coalition carried out a maritime campaign which succeeded in securing Yemen’s sea ports, where all arriving and departing ships were being screened.

He added that there was a failed attempt by the Houthis to launch a ballistic missile targeting a Saudi centre along the border.

“Houthi militia launched the missile in Sanaa, but it fell due to technical malfunction, and the coalition forces rushed to the area and destroyed it.”

The spokesperson said that the objective of the coalition was to destroy all ballistic missiles of the Houthis and stop them from advancing towards the southern port city of Aden, where Yemen’s President Abd-Rabbu Mansour Hadi had been holding court since the rebels took over the control of capital Sanaa earlier this year.

Al Asiri said that the rebel militias were storing weapons to attack Yemenis and the neighbouring countries.

Saudi Arabia and fellow Gulf Cooperation Council (GCC) states launched airstrikes on Houthi positions in Yemen on March 26, a move condemned by Iran, but supported by the US, Egypt, Jordan, and Morocco.

Coalition warplanes continued raiding Sanaa and other major provinces in Yemen on Monday, as the airstrikes against the rebels entered the fifth day.

Saudi Arabia said that the airstrikes against the Houthis would continue until security was restored and Yemen’s President Hadi, who had fled the country, was able to rule.

Yemen has been mired in deep political conflict since the Houthis seized power in early February, which worsened after the president’s flight to Aden.

More than a dozen countries have closed their embassies in Sanaa in protest against the Houthi takeover of Sanaa and for security concerns.

In the face of the worsening security situation in Yemen, the Arab League on Sunday called for the establishment of a voluntary, unified military force that member states could turn to when facing challenges to their security.
Read more at http://www.thestatesman.com/news/latest-headlines/anti-houthi-coalition-takes-control-of-yemen-s-sea-ports/54996.html#GgtAHd6j0SWgitDO.99