You are here: Home / MidEastGulf / Anti-Houthi coalition closes in on Yemeni capital Sanaa 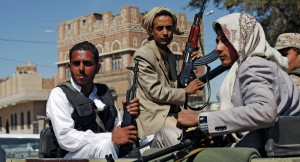 Fighters loyal to the exiled Yemeni government are continuing a northward advance against Iran-allied Shi’ite Houthi rebels, and are closing in on recapturing the group’s stronghold in the capital city of Sanaa.

After intense fighting and heavy clashes, pro-government forces in Yemen have recaptured from Houthi rebels six districts in the central province of Ibb on Monday. The capture marks a strategic gain for the pro-government fighters, as it brings them closer to seizing the capital city of Sanaa.The advancement in Ibb comes after a series of northward gains for pro-government fighters, consisting of Sunni Islamist militants backed by a Gulf airstrike campaign and trained by Saudi Arabia and the United Arab Emirates. Last month, the group recaptured the strategic port city of Aden. The city was seized by Houthi rebels in March, forcing President Abd-Rabbu Mansour Hadi to flee to Saudi Arabia.

From there, pro-government forces began to advance northward toward Sanaa, which had fallen to Houthi fighters in September.

The rapid progress of government forces had led to the withdrawal of Houthi rebels from several territories. In anticipation of the offensive, the rebels additionally declared a state of emergency on Sunday night that took effect shortly after midnight.

Senior Yemeni military commander, Abdullah Subaihi, with the pro-government forces, said he expected the loyalist fighters to retake Sanaa within the next two weeks, according to Al Arabiya.

“Popular resistance forces and the national army,” he told Al Arabiya, referring to pro-government forces, “backed by tanks supplied by the Saudi-led Arab coalition, managed in the early hours of Sunday to seize control of the 15th military brigade and all government buildings,” in Sanaa.

Led by Saudi Arabia, which was concerned about Iranian influence in its backyard, Hadi’s Gulf allies launched an airstrike offensive against Houthi fighters in March.  The four-month long airstrike campaign has killed over 4,000 people, and plunged Yemen into an ever worsening humanitarian crisis, as hunger and disease spread through the war-torn nation.