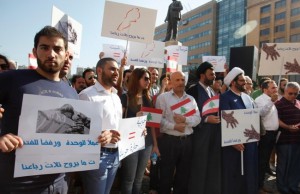 Roughly 100 people, mostly men, participated in the rally at the Riad al-Solh statue in Downtown Beirut.

The speakers urged politicians to tone down their sectarian rhetoric and warned against entangling Lebanon in the war in Syria.

“We believe in the strength of reason, and not the logic of strength,” said journalist Ali al-Amin, the editor-in-chief of the Janoubiah website.

Although none of the speakers mentioned Hezbollah or Nasrallah by name, the rally was a pointed response to his recent pledge to intensify the party’s war against Assad’s opponents in Syria.

Nasrallah has also defamed Hezbollah’s Shiite detractors in Lebanon, referring to them as “Shiites of the U.S. Embassy” and calling them “traitors, collaborators, and idiots” in a speech he gave to his party’s wounded soldiers in late May.

Journalist Imad Qmayha told the crowd at the rally: “We are not the Shiites of the embassy, and we do not accept to be called that.”

He insinuated that Hezbollah deserved the appellation instead. “In fact, we say Lebanon’s greatest ordeals are caused by the Shiites of the embassies,” he said, alluding to the party’s close ties to Iran.

Sheikh Abbas al-Jawhari rejected the notion that any Lebanese parties should fight in Syria.

“If the purpose is to defend Lebanon, then we stand in one line at the border, behind the authority that derives its legitimacy from the Constitution: the Lebanese Army,” he said.

Jawhari described the war in Syria as a revolution that extremists had “strangled and distorted.”

He condemned Hezbollah for failing to make the distinction between rebels who demand rightful change and Islamist militants.

Jawhari labeled the Syrian regime as “criminal,” and said the revolution was against “the despotism that governs the Arab lands, that is the enemy of people, of minds and of progress.” However, he did not advocate lending the revolutionaries support.

“Shiite thought has never varied on this matter, and it is the opinion of its historical leaders: Lebanon is a nation for all its sons,” Amin said.

“Our most noble and greatest task is to protect Lebanon and its people from chaos,” Amin added. “And the only way is as a nation, whose citizens live among each other as equals and not as sectarian subjects.”

Amin said Lebanon’s internal confrontations against ISIS must not tear the country apart. “We cannot retaliate against the takfiris by appropriating the border, nor by annulling Lebanese citizenship,” he said, referring to Hezbollah’s fighting in Arsal and the Qalamoun mountains.

Tyre activist Ali Eid exhorted national politicians to resume government meetings. “Delaying appointments and obstructing the Cabinet is a crime against Lebanon. Any contribution to these obstructions is treachery,” he said.

Backed by their allies in Hezbollah, the Marada Movement and the Tashnag Party, the Free Patriotic Movement’s ministers have said they would not allow the Cabinet to discuss any topic before it addresses appointments of new security chiefs, including that of Aoun’s son-in-law, Brig. Gen. Shamel Roukoz, the head of the Army Commando Unit, as Army commander.