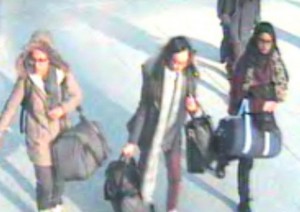 The move is part measures aimed at keeping children safe from “the spell of twisted ideologies”, Education Secretary Nicky Morgan said. There will also be more Ofsted investigations into unregistered, illegal schools, and tougher action to prosecute them. This will include giving the watchdog more resources to carry out inquiries, according to the Department for Education (DfE). The new Educate Against Hate website will offer advice based on resources and guidance drawn up by the Government and charities including the NSPCC and Childnet. The academy was in the news last year after it was revealed that three female pupils – Shamima Begum, Kadiza Sultana and Amira Abase – were feared to have travelled to Syria.
The academy has been working to promote the best ways of protecting children from extremism, the DfE said. Mrs Morgan said: “We are determined to keep children safe in and out of school. Today’s announcement of resources and tougher powers to protect young, impressionable minds from radical views sends a clear message to extremists: our children are firmly out of your reach. “Educate Against Hate will provide teachers and parents with the expertise they need to challenge radical views and keep their children safe. Our tougher stand against illegal schools will help prevent children from falling under the grasp of extremists. “And by improving intelligence on where children go when they deregister from schools, we will help prevent future incidents of young, promising children falling under the spell of twisted ideologies.”
There will be a consultation on registering children that go missing from school. It is understood that a child missing from school is any youngster of compulsory school-age who is not registered at a school or who is not receiving a suitable education. This means that the consultation could cover youngsters who are home-schooled. Last month, it was revealed that schools are be told to set filters and monitor pupils’ internet access, amid growing concerns that some youngsters are at risk of being targeted by extremist groups, and a number of high-profile cases involving schoolchildren travelling, or attempting to travel, to Syria. Ministers said that in some cases, young people had been able to access information about self-proclaimed Islamic State, otherwise known as Daesh, and foreign fighters through school computers.
london24.com