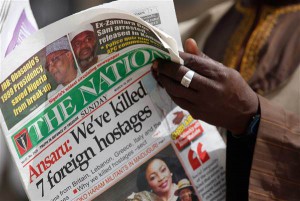 Ask anyone to name a Nigerian militant group and chances are they’ll mention Boko Haram, the Islamist sect that was ranked last year as the world’s deadliest terror organization.

Far less infamous, however, is a Boko Haram splinter group known as Ansaru. This organization came to the fore last weekend after the Nigerian military claimed to have captured its leader — a militant commander with a $5 million U.S. State Department bounty on his head.

Here’s what you need to know:

Ansaru is one of several militant organizations operating in Nigeria and has been classified as a terrorist group by the United States, the United Nations and others. The group’s full name is the “Vanguard for the protection of Muslims in Black Africa.”

Some of its leaders were once members of Boko Haram, but Ansaru splintered off and declared itself an independent organization on Jan. 1, 2012.

Over the next few years, it claimed a string of kidnappings and killings against Westerners in northern Nigeria, and analysts believe the group has links with al Qaeda in the Islamic Maghreb, or AQIM, which claimed a deadly attack on an Ivory Coast hotel last month.

Ansaru’s stated goal is to “defend Muslims throughout all of Africa by fighting against the Nigerian government and international interests,” according to the State Department.

While Boko Haram pledged allegiance to ISIS last year, the International Crisis Group has described Ansaru as “Nigeria’s al Qaeda franchise,” due to its links with that network.

Why is it important now?

While Ansaru has been fairly quiet for the past couple of years, Nigeria’s military claimed on April 2 that they had captured its leader, Khalid al-Barnawi. If this is confirmed, it would represent a significant win for the country’s security forces.

The U.S. classified Barnawi as “specially designated global terrorist” in June 2012 and the State Department slapped a $5 million bounty on his head. “Barnawi and Ansaru have committed multiple acts of terrorism against civilians and Nigerian government officials,” according to State’s Rewards For Justice program.

However, some experts have disputed the military’s claim.

Nigerian security analyst Fulan Nasrullah told Reuters that he had received assurances the militant was alive. “Khalid’s people and I have spoken and they have said that he is free and was not captured,” Nasrullah told the news agency. “They have no photos of him, nor do they know any concrete information about him.”

How powerful is it?

Little is known about Ansaru’s command structure or the number of fighters at its disposal.

The State Department said that its “total membership is unknown” but noted that “given its narrower scope of operations, it is estimated that Ansaru’s membership is much smaller than that of Boko Haram’s.”

But what the group lacks in numbers it makes up for in expertise.

“Conventional wisdom is that Ansaru’s operatives are better educated, better trained, and much more international in outlook than those of Boko Haram,” John Campbell, former U.S. ambassador to Nigeria, wrote in an article Monday for the Council on Foreign Relations, where he is now a senior fellow.

Some of the men who would go onto lead Ansaru are believed to have received training from AQIM in the Algerian desert.

How violent is it?

Although it has not carried out anything like the same level of bloodshed Boko Haram, Ansaru’s short history has been punctuated by several high-profile kidnappings of Western hostages.

Before it announced its existence, the group “may have” been responsible for the kidnapping of the British and Italian construction workers Christopher McManus and Franco Lamolinara in May 2011, according to the Combating Terrorism Center at West Point.

Both men were killed less than a year later during a rescue attempt by U.K. and Nigerian forces.

Ansaru was believed to be behind the 2013 kidnapping of German construction worker Edgar Raupach, who was also killed during a rescue attempt by Nigerian security forces.

The group also claimed responsibility for kidnapping and then killing seven construction workers, including a Briton, a Greek, an Italian and four Lebanese people, from the town of Jama’are in Feb. 2013.

“They have engaged in a number of kidnappings most of which are mostly Western targets,” Dr Hakeem Onapajo, a postdoctoral fellow at South Africa’s University of Zululand, told NBC News in an email.

Onapajo also noted that in some of these kidnappings “a huge amount was reportedly paid as ransom.”

What is its relationship with Boko Haram?

One of its leaders appeared in a video in June 2012, proclaiming that his group would “not kill innocent non-Muslims, except in “self-defense” and that they would “not kill ‘innocent security operatives'” unless they attacked first, according to a translation by the Jamestown Foundations’ Militant Leadership Monitor.

Another video attributed to Ansaru last year saw the group denounce Boko Haram’s “physical and bomb attacks at Muslims and public places such as mosques, markets, and motor parks,” a transcript by the Long War Journal said. “These acts are contrary to the teachings of Islam.”

Ansaru has also opposed Boko Haram’s “rather obnoxious leadership,” Murray Last, emeritus professor of anthropology at University College London, told NBC News. He said there was “quite a lot of antipathy” between the two groups, “particularly because Ansaru was not keen on killing other Muslims.”

However, some experts have suggested this rift has since been mended, evidenced by Ansaru becoming quieter over the past two years.

“There are reports that they have since resolved their differences,” said Onapajo at South Africa’s University of Zululand. “We have not been reading much about them. I think they have been working under the framework of the larger Boko Haram.”

Although this appears nothing more than speculation at this point, State Department said the theory is plausible. “Ansaru maintained a working relationship with Boko Haram and during 2014 may have rejoined with the larger group,” it said.