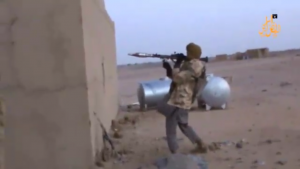 In a low-quality video released earlier last week, Ansar Dine, a largely Tuareg front group for al Qaeda in the Islamic Maghreb (AQIM), highlights its coordinated assault on a Tuareg separatist group in northern Mali last month. The separatist group, the National Movement for the Liberation of Azawad (MNLA), previously worked with Ansar Dine and other al Qaeda groups to take over Mali’s north in 2012.

The video begins with archival footage of the French intervention in Mali in early 2013 before sending a message to the MNLA. “It was the message of the mujahideen in this clear-cut war that the first target was the invading Crusaders and with them the invading Malian army and the groups that profess national defense on the land, of whom holds clear hostility against the mujahideen.” The statement continues by saying that “it was our position with them to unite in neutrality, not targeting them unless they subjected us or opposed our path.”

It then shifts to showing the preparation and then execution of the assault on the MNLA-held town of Talhandak, close to the Algerian border. The jihadists are shown attacking the town with technicals (armed pickup trucks), variants of the AK-47 assault rifle, light machine guns, and rocket-propelled grenades (RPG’s). The last few minutes of the video shows the jihadists collecting their “spoils” of weapons and then burning a truck that belonged to the MNLA.

According to the video, 11 members of the MNLA were killed in the operation. Additionally, four vehicles were burned, two were captured, and Ansar Dine took control of the town “after four hours of the battle.” The capture of Talhandak was reportedly confirmed by Sahara Media last month.

The assault on the MNLA was originally claimed on behalf of Ansar Dine by AQIM, al Qaeda’s official branch in North Africa, late last month. According to a statement released by AQIM and later translated by the SITE Intelligence Group, the jihadist group said it targeted a “local agent of the Crusaders known as Trawa Trawa,” who heads the so-called “internal security cells” funded by France in northern Mali to fight Islam and the Muslims.” In the same statement, AQIM warned the MNLA to stop working with the “Crusaders.” [See LWJ report, Al Qaeda group strikes in northern Mali.]

The attack and subsequent video come as tensions between Ansar Dine and separatist Tuareg groups have escalated. According to some reports, Ansar Dine and the MNLA have officially declared war on each other and the two have seen other clashes and kidnappings of members of their respective groups. One MNLA source told Jeune Afrique that the group has been able to seize “16 vehicles and around 60 motorcycles” from Ansar Dine, as well as a plethora of weapons, ammunition and cell phones since 2014.

Sporadic conflicts have been reported since last year. For instance, on Jan. 26, 2015, AQIM said it assassinated a “senior MNLA official” in his home near Tessalit. A week before that, two MNLA fighters were killed in an IED attack, which is suspected to have been perpetrated by al Qaeda. On March 2, 2015, three MNLA fighters were killed in another IED attack near Kidal. And while the assault in Talhandak was occurring, Ansar Dine ambushed a convoy of MNLA fighters near Kidal who were reportedly attempting to reinforce the besieged fighters further north.