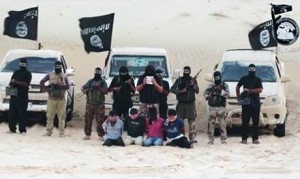 “Attention. The statement spread in the media about our alleged allegiance to the Muslim caliphate is not ours, everyone should be careful and only take news from our main sources,” said a tweet published on what is thought to be the group’s official Twitter account ‘@3Ansar_B_Almqds‘.

The account has been used to claim responsibility for several attacks, including an assassination attempt on interior minister Ahmed Ibrahim. It regularly publishes the group’s official statements and video clips.

On Sunday, media reports said the group had sworn allegiance to IS, the Syria and Iraq-based militant group.

“After asking God we decided to swear allegiance to the emir of the faithful, Abu Bakr Al-Baghdadi, caliph of the Muslims in Syria and Iraq and in other countries,” the alleged statement said.

Last week, the government declared a three-month state of emergency in parts of North Sinai following attacks that killed at least 33 security personnel in some of the worst violence since the ouster of Islamist president Mohamed Morsi.