You are here: Home / Europe / Another Kosovo man killed in Syria while fighting alongside Islamic State 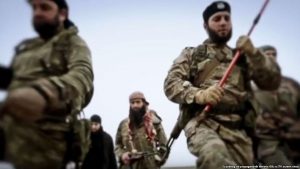 Another Kosovo man has been killed in Syria, while fighting alongside the terrorist organisation of ISIS (ISIL, Islamic State), gazetaexpress.com reports.

The killed jihadist is Betim Ibrahimaj from the municipality of Istok. The news has been confirmed by his wife who is also in Syria. She informed members of the Ibrahimaj family, that their son Betim has been killed.

The news on killing of the Kosovo man in Syria was confirmed also by the Kosovo Police. KP spokesperson, Daut Hoxha, said that the police have information on killing of Betim Ibrahimaj, but because of the situation in Syria, they couldn’t get any documents confirming his death.