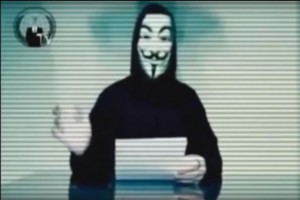 Anonymous claims to have foiled an ISIS terror plot in Italy while spying on the terror group’s communications.

The hacker collective made the claim in a series of tweets from its account opened after the Paris Attacks.

It comes days after they issued a rallying call for those that want to join its cause .

In an official-looking video posted on YouTube, a pseudo-newsreader wearing a Guy Fawkes mask reads out a statement.

In a voice disguised by a computer, the reader talks with the usual Anonymous hyperbole – praising the group’s chaotic, leaderless structure.

“Anonymous is not an organisation, it is not a club, a party or even a movement. There is no charter, no manifest, no membership fees. All we are is people who travel together.”

The reader goes on to discuss the way members communicate with each other through established lines of communication. Using social networks in order to group together.

In this month we are working in silence. We have already foiled 1 attack #ISIS against #Italy, we hope to block others. #OpParis#Anonymous

When it comes to who can be a member of Anonymous, the definition is pretty broad .

“We come from all racers, countries and ethinicities,” the masked reader states.

“We are many, we are your neighbours, your co-workers, your hairdressers, your bus drivers and your network administrators. We are the guy on the street with the suitcase. We are the girl in the bar you are trying to chat up. We are Anonymous.”

Traditionally, Anonymous opposes government control and surveillance , but it has also pledged to take on ISIS following the dreadful attacks in Paris earlier this year.

The video was posted on December 23 and has already attracted positive comments and requests for Anonymous to do something about Lizard Squad, another well-known group of hackers .

The video also suggests tips to make contact with other Anonymous members and how to guard privacy online.

The video then signs off in typical fashion.