You are here: Home / MidEastGulf / Anonymous declares war against Turkey, takes down 400,000 sites 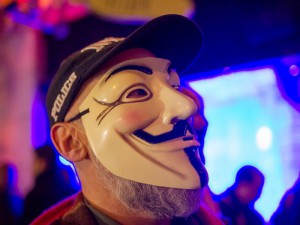 The popular hacktivist collective Anonymous has not only declared war against ISIS but now against Turkey over the country’s alleged support for the Islamic State terrorist group in Iraq and Syria.

The collective claimed responsibility for the massive cyberattacks on Turkey’s Internet from Dec. 14 through Dec. 21, taking down roughly about 400,000 websites, the Turkish media say.

The group purportedly employed Distributed Denial of Service (DDoS) attacks, resulting in the disruption of online services and transactions.

“As many of you have heard, Turkey is supporting Daesh [ISIS] by buying oil from them and hospitalizing their fighters,” said a video allegedly produced by the collective. “We won’t accept that [President Recep Tayyip] Erdogan, the leader of Turkey, will help Isis any longer. The news media has already stated that Turkey’s internet has been the victim of massive DDoS attacks.”

The group warned that if the Turkish government is not going to stop supporting ISIS, it will continue to attack the country’s Internet, root DNS, banks, and even government sites.

The group added that it will start destroying the country’s airports, military assets, private state connections and banking infrastructures.

During the attacks, a rumor surfaced suggesting that the hackers behind the cyberattacks could have been working with the Russian government. The speculation is linked to the Russian fighter jet downed by Turkish missiles over the Syrian border back in November.

These cyberattacks are deemed the biggest and most intense so far in Turkey’s history.

Previously, the hacktivist group carried out quite a few operations. Some of which include the taking down of websites and Twitter accounts reportedly linked to the terrorist group. It was also responsible for releasing the names and other personal information of about 1,000 purported members of the Ku Klux Klan members.

In the meantime, the Russian government earlier tagged Turkey as among the supporters of ISIS. In fact, Russian President Vladimir Putin even called the Turkish government as being the “accomplices of terrorists,” particularly after its fighter jet was downed.

The group posted a video over YouTube warning Trump after his proposal to ban Muslims from entering the U.S.

The statement of Trump came hot on the heels of a shooting incident in San Bernardino, in which 14 individuals were killed.

“Trump Towers taken down as statement against racism and hatred,” Anonymous said over Twitter.