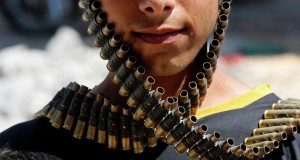 Turkey has held European countries responsible for a flawed and “orientalist” approach to the issue of foreign jihadists, saying the nations are not conducting an effective struggle against the sources of the problem.

Noting that an essential and increasing number of foreign fighters joining the Islamic State of Iraq and the Levant (ISIL) were coming from European countries, Turkey blamed the countries for not taking sufficient measures against problems related to Islamophobia and integration, which it listed as reasons for radicalization, and for not preventing suspects from traveling abroad.

Cemalettin Haşimi, head of the Turkish Prime Ministry’s Directorate General of Press and Information, told reporters in Paris on Aug. 12 that the rate of expulsions from Turkey was increasing, with 700 expelled so far this year versus just 520 in all of 2014.

In total, since the start of the civil war in Syria in 2011, more than 1,800 suspected fighters have been prevented from slipping into the country from Turkey, said Haşimi. Turkey has also drawn up a list of 16,000 “foreign terrorist fighters banned from entering Turkey” from 108 countries, he said.

In Ankara, an official statement by the Prime Ministry argued that Western analyses try to explain radicalization in European countries with religious and cultural motives.

“This orientalist perspective is far from explaining the issue of radicalization. Quite the contrary, the processes that lead to radicalization in the region are purely political, and is a result of the representativeness and legitimacy crises and of the failures in regional and global politics” said the Prime Ministry’s Office of Public Diplomacy in an information note released on Aug. 13.

“As of July 2015, the number of Turkish citizens who joined the Daesh terrorist organization, returned or died is between 1000 and 1,300. Despite Turkey sharing a 1,300-kilometer-long borders with Syria and Iraq and having a population of almost 80 million Muslims, Turkey does not appear even in the first 10 countries with the highest participation in Daesh” said the note, “Foreign Terrorist Fighters and Border Security” which used the Arabic name for ISIL.

“On the other hand, the number of citizens of the Republic of Turkey who joined the PYD [Syria’s Democratic Union Party] ranks, mainly since June 2014, is around 1,000 to 1,500” it said.

In Paris, Haşimi urged greater international cooperation to prevent the suspected fighters from leaving their home countries to wage jihad in Syria.

The issue of foreign fighters is an “international problem that requires an international response,” Haşimi said.

Turkey attracts around 40 million tourists every year and “there’s no question of carrying out security checks on everyone that comes to our country” he said.