You are here: Home / MidEastGulf / Ankara may consider coalition participation to combat ISIL on Syrian border 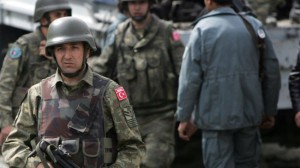 Ankara may propose its coalition partners to join operations along the border with Syria in the fight against the Islamic State (ISIL), Turkish Ambassador to Russia Ümit Yardim said.

The ambassador said that it was premature to begin such an operation, but if it needs to be done, then “it would be done with those countries who are members of the coalition that Turkey gives its approval.”