You are here: Home / MidEastGulf / Ankara is ready to support Peshmerga for the first time 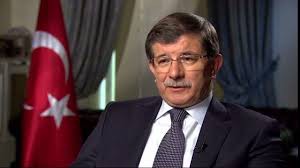 Turkish Prime Minister Ahmet Davutoğlu has told CNN’s Christiane Amanpour that his government will “take all the measures to stop” arms reaching Kurdish forces in Syria.

In a wide-ranging interview on Monday night which discussed the refugee crisis, the suspected bombing of the Russian passenger jet over the Sinai Peninsula and the recent success of his Justice & Development Party (AKP) in the November 1st elections, Davutoğlu suggested that Peshmerga forces in Iraq should extend their fight against Islamic State (IS) into Syria. Rather than Iraqi Kurdish Peshmerga, the Turkish PM was likely refering to the KDPS Syrian Kurdish Peshmerga, trained and armed by the KRG.

“If they [the US] want to help or arm Barzani and Peshmerga groups in Iraq, and help them to go to Syria to fight against ISIL we are ready to help,” he said when asked by Amanpour why the Turkish government is making it difficult for the US to arm Kurdish groups in Syria.

““First let us clarify – not Kurds, PYD [Democratic Union Party] as a wing of PKK [Kurdistan Workers’ Party]. The Free Syrian Army is fighting ISIL and we can arm the Free Syrian Army. There is another Kurdish group – Peshmergas. We allowed Peshmergas to go through Turkey to Kobani, in order to help Kobani to be freed.”

“We cannot and we will not tolerate any help to PKK-related groups in Syria or in Iraq. If that happens, Turkey will take all the measures to stop this.”

Asked if Turkey would agree to be a ground force against IS in Syria, Davutoğlu gave the clearest indication yet that his government would, in the right circumstances, take a larger role in the war against the jihadists.

“There is a need of an integrated strategy, including air and ground troops, but Turkey alone cannot take all this burden. If there is a coalition and a very well designed integrated strategy, then Turkey is ready to take part in all sense. We have to solve the Syrian crisis in a comprehensive manner.”