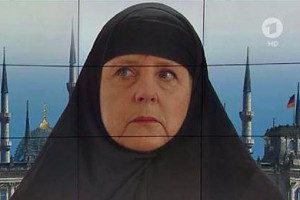 An image of Angela Merkel wearing a Muslim headdress has provoked a backlash against a German TV station.

The photoshopped picture shows the German chancellor wearing a black chador and posing in front of minarets rising over the Reichstag, the German seat of government.

It was used by German TV show ‘Report from Berlin’ as the backdrop to a debate on whether there should be a quota for refugees.

But the image, dubbed the “Merka”, saw some viewers complain it looked like a picture used on posters at marches by anti-Muslim group Pegida – Patriotic Europeans against the Islamification of the West.

One viewer wrote on the programme’s Facebook page: “The popular mood turns because of such defamation and propaganda – making it impossible for integration to succeed,” according to a report by The Times

But the shows editors defended their use of the photo, saying in a statement: “We are pleased with the numerous criticisms of our graphics and are very sorry that some disagreed with our view of the chancellor or they have even misunderstood.”

Tensions over the continuing influx of refugees to Germany have continued to rise, with 9,000 people marching against immigrants on Monday.

Official estimates are of 800,000 arrivals this year but a confidential government report leaked to German newspaper, Bild, suggested it could rise as high as 7.36 million – almost 10% of Germany’s total population.

The document pointed out that each immigrant could arrange for up to eight relatives to join them, as entitled if they are granted refugee status.