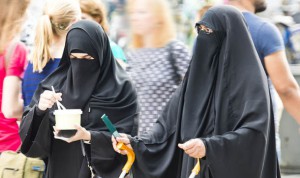 Accepting her party’s nomination as its candidate for another four-year term, the chancellor used the moment to broaden her stance on banning the veil, trying to deflect challenges from far-right forces that have made some of their deepest gains since World War II.

In welcoming nearly one million asylum seekers to Germany a year ago, Ms. Merkel emerged as a powerful voice for tolerance across a Europe gripped by anxiety over waves of arriving migrants and fears of terrorism.

Now, as anti-immigrant parties have advanced at the expense of mainstream parties, including her own, Ms. Merkel tried a tricky balancing act between holding fast to Western values and tilting farther right to avoid being outflanked by populist challengers.

In the 80-minute speech, she repeated the same catalog of beliefs in freedom and equal treatment she had made as an implicit criticism of President-elect Donald J. Trump, but also stiffened her position on the veil and suggested that Germany would be more cautious in welcoming migrants in the future.

In a clear nod to criticism that the state had appeared to lose control over its borders, the chancellor opened her speech to the annual conference of her Christian Democratic Union with a promise that such a situation “cannot, may not and should not be repeated.”

But the biggest applause lines concerned law and order, including a promise that Shariah law would never replace German justice — a problem that has barely arisen but has been cast as a specter by the far-right party Alternative for Germany.