You are here: Home / West Asia / An Islamic State province in southern Philippines? 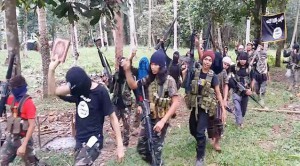 Analysts say this video shows four different armed groups from the Southern Philippine island of Mindanao together with foreign operatives, all pledging allegiance to the Islamic State, also known as IS, ISIS or ISIL. It is evidence, they say, of ISIL slowly being able to establish its presence in Southeast Asia.

“I think the mere fact that ISIS officially recognized the activity in its official organ Al Naba already indicates interest of ISIS to really have a province in Southeast Asia. And Mindanao is the best candidate for them because of the enthusiasm of the local groups operating there and at the same time the support also that Moro militants are getting from like-minded militants from Indonesia and Malaysia,” said Rommel Banlaoi, International Security Analyst.

It is the latest in a string of videos released online that feature Muslim militants from the Southern Philippines aligning themselves with ISIL.

This alleged ISIL training camp is seen in footage posted online in November and December last year. One of them is accompanied by a threat against the APEC Summit in Manila.

The Philippine military acknowledges the existence of ISIL sympathizers and followers in the South but insists they have no direct links to ISIL.

“In our assessment, there remains to be no direct, verified, and credible links. And we see that as a means of propaganda just primarily, as I mentioned, to be able to get some degree of support. And the support can come in financial which I think is the primary motive,” said Gen. Restituto Padilla, AFP spokesperson.

Banlaoi believes Philippine authorities have so far been effective in foiling attempts to carry out terror attacks… like the one that just happened in Jakarta. But with recognition and support from ISIL now apparently closer to reality, he says authorities shouldn’t let their guard down.

“It’s just a matter of time because these groups have the intention and capabilities to pursue bombing operations in Metro Manila,” Rommel Banlaoi said.

Terror attacks have been carried out here in the Philippines – mostly in the South, some here in the capital – but experts say what’s alarming is that they could be doing it now under the brand of ISIL, a group that has proven to be more brazen and radical than Al Qaeda.