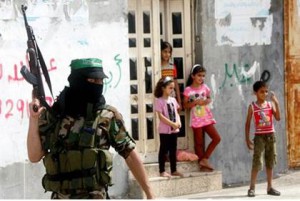 Amnesty International said in a report on Wednesday that Islamist Hamas committed war crimes against Palestinian civilians in the Gaza Strip during last year’s war with Israel.
A ceasefire last August ended 50 days of fighting between Gaza militants and Israel in which health officials said more than 2,100 Palestinians, mostly civilians, were killed. Israel put the number of its dead at 67 soldiers and six civilians.
“Hamas forces carried out a brutal campaign of abductions, torture and unlawful killings against Palestinians accused of ‘collaborating’ with Israel and others during Israel’s military offensive against Gaza,” the human rights group’s report said.
A Hamas spokesman criticized the report as being unfair, unprofessional and not credible.
“The report is dedicated against Palestinian resistance and the Hamas movement … it deliberately exaggerated its descriptions without listening to all sides and without making an effort to check the truthfulness of details and information,” said Fawzi Barhoum, a Hamas spokesman.
In a previous report in March, Amnesty also criticized Israel and accused it of war crimes during the conflict. Apart from the many deaths, at least 16,245 homes were destroyed or rendered uninhabitable. Gaza militants fired thousands of rockets and mortar bombs at Israel.
In Wednesday’s report, Amnesty listed a number of cases it described as “spine chilling” in which Palestinians accused by Hamas of helping Israel were tortured and killed.
“The de facto Hamas administration granted its security forces free rein to carry out horrific abuses including against people in its custody. These spine-chilling actions, some of which amount to war crimes, were designed to exact revenge and spread fear across the Gaza Strip,” Amnesty said.
Hamas controls the Gaza Strip, a coastal enclave on the Mediterranean which borders Israel and Egypt.
The Palestinians have joined the International Criminal Court since the end of the war, a move opposed by Israel, and the ICC is examining possible war crimes in the conflict. But joining the court also exposes Palestinians to possible prosecution if a case is opened.